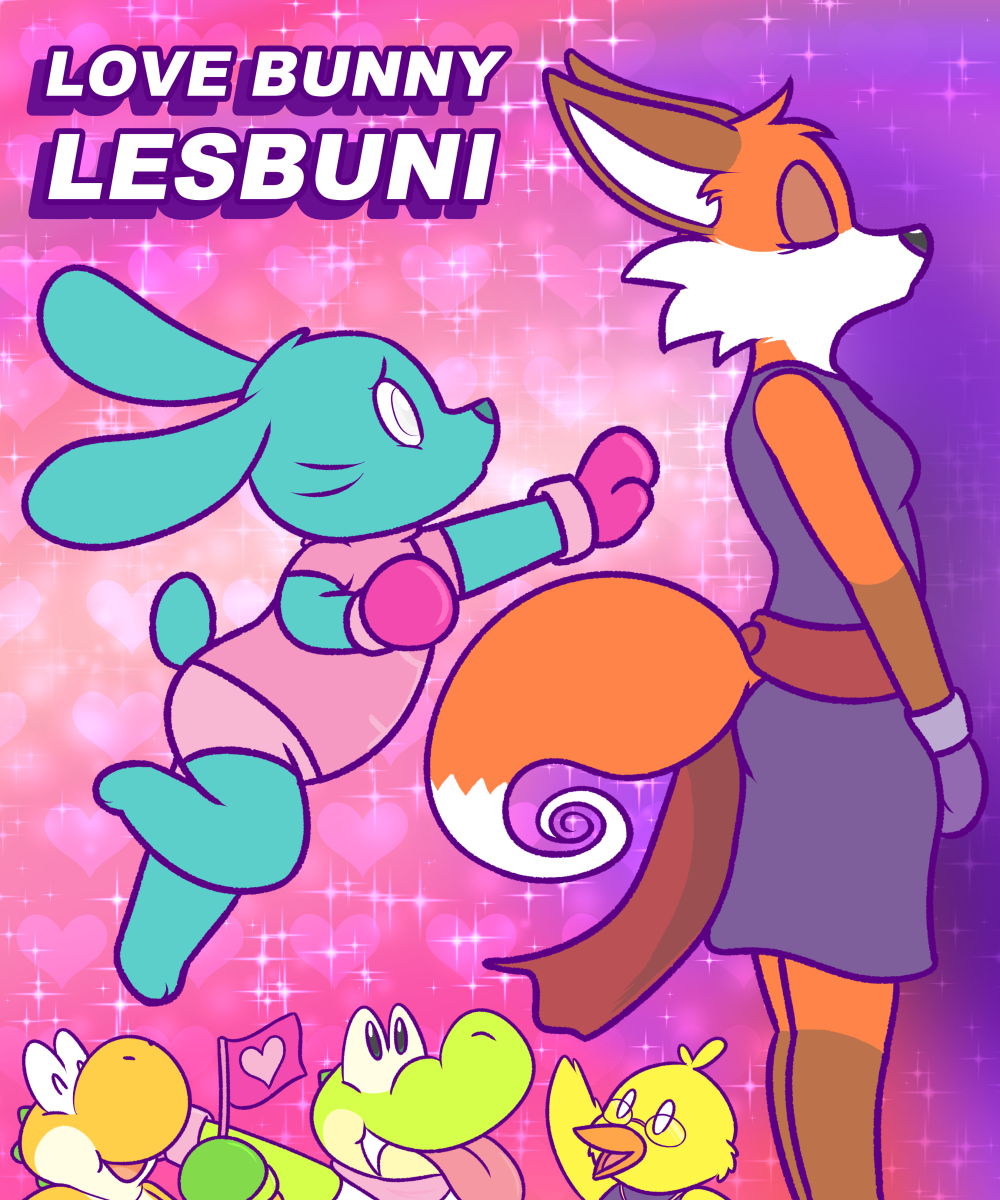 Lesbuni opened her eyes at dawn. She was so nervous about the first day of Boxer Beats that she could barely sleep!

There was someone special that Lesbuni wanted to meet today. She hadn’t seen or talked to them in a very long time. She didn’t know what it would be like when the two finally saw each other again.

The short little bunny must have slept in the pink boxing outfit that complimented her teal fur. She had tall rabbit ears that bent forward and bounced as she walked, and they did a lot of bouncin’ as she hopped outside and headed out to Boxer Beats.

A cute little bunny like her didn’t seem like the typical, muscular beast you’d see sweatin’ it up in a boxing ring. But Lesbuni was aggressive and fought all the time! ...Online. She uh, didn’t really get along with animals online. Or offline. In fact, Lesbuni looked cute and pleasant, but she had a hard time getting along with most animals. At least that meant fighting came naturally to her!

“Lesbuni!” her friendly dino-butt buddy waved to her as she approached the Boxer Beats stadium.

“Aw cripes...” Lesbuni thought quietly to herself. Sure, he was her friend, but any form of social interaction was stressful for her. “Hey Nishi.”

The silly orange dinosaur stomped on over to her, wrapping an arm around her back - but no touching! That was one of the many things that made Lesbuni uncomfortable. Thankfully after years of friendship, Nishi had perfected the art of not bothering her. He hovered his hand over the bunny’s shoulder as he showed her a piece of paper.

“You should probably see this!” His goofy voice had a tone of caution to it - there was bad news approaching.

Lesbuni closed her eyes, “If you drew something without clothes, I don’t want to see it.” The bunny huffed, raising her snout.

“Come on, I know you well enough by now!” He waggled the paper in front of her, “It’s about a hiiiiighly controversial thing that people aren’t going to liiiiiike~”

Lesbuni’s eyes shot wide open. That was the stuff! She held the paper and read it, but her big excited smile sunk into disappointment. It wasn’t the kind of controversy she was expecting.

Lesbuni’s lips quivered, “I... I didn’t even want to join this competition. But when I heard she was going to be here...” The bunny’s ears started to droop over her face. “I was willing to fight and get hurt, just to be with her again...”

Nishi instinctively pat Lesbuni’s back, seeing how disappointed she was.

“It’s okay, I don’t mind this time...” Her hand instinctively slapped his away.

“So... if you can’t be on a team with anyone, are you still going to fight?” Nishi wondered - Lesbuni looked a little uncertain.

“Really!?” Nishi grinned and jumped up and down, “Awww, that’s great! You’re so brave, Lesbuni. It’ll be okay! We still don’t have to worry about professional boxers fighting in this competition - most critters competing are a bunch of normal girls and non-girls like us.”

Lesbuni smirked, “Not sure you qualify as normal.”

“Normal enough!” the dino dork whined. “Hehe... I’m really happy you decided to join Boxer Beats. You and my other buddies are all here - it means a lot to me!” Nishi gave a flirty wink, “You might still see that special someone too...”

Normally, Lesbuni would feel sick seeing a guy wink or act flirty around her - but she didn’t have to worry about Nishi. He knew who she was really interested in!

Lesbuni’s little heart lit up with hope. It was so hard finding animals she could relate to. All she wanted was to be with that special someone that made her feel like she fit in with the world again...


The two found their seats in the stadium, and as the competition started, a group of dancing rodents paraded themselves around on stage! Lesbuni gasped and looked away from their bouncing buns.

“I don’t want to see girls dancing around in underwear for a male audience, it’s-”

“It’s equal!” Nishi went wide-eyed, “There are girls AND guys dancing in their underwear out there! And uh... some are inbetween? Or neither? Hard to tell!”

Lesbuni peeked one suspicious eye over to the dancing rodents - she looked and noticed that it wasn’t your typical, skinny ladies dancing around in undies. It was a big and varied group of rodents! Some were thick, some were thin. There were girls, guys, and some that weren’t easy to identify.

“Oh, I kinda... I like that.” Lesbuni thought out loud before looking away. “But eh, too many guys.” Maybe she couldn’t be completely content, but Nishi appreciated her appreciation of the competition’s curvaceous consideration.