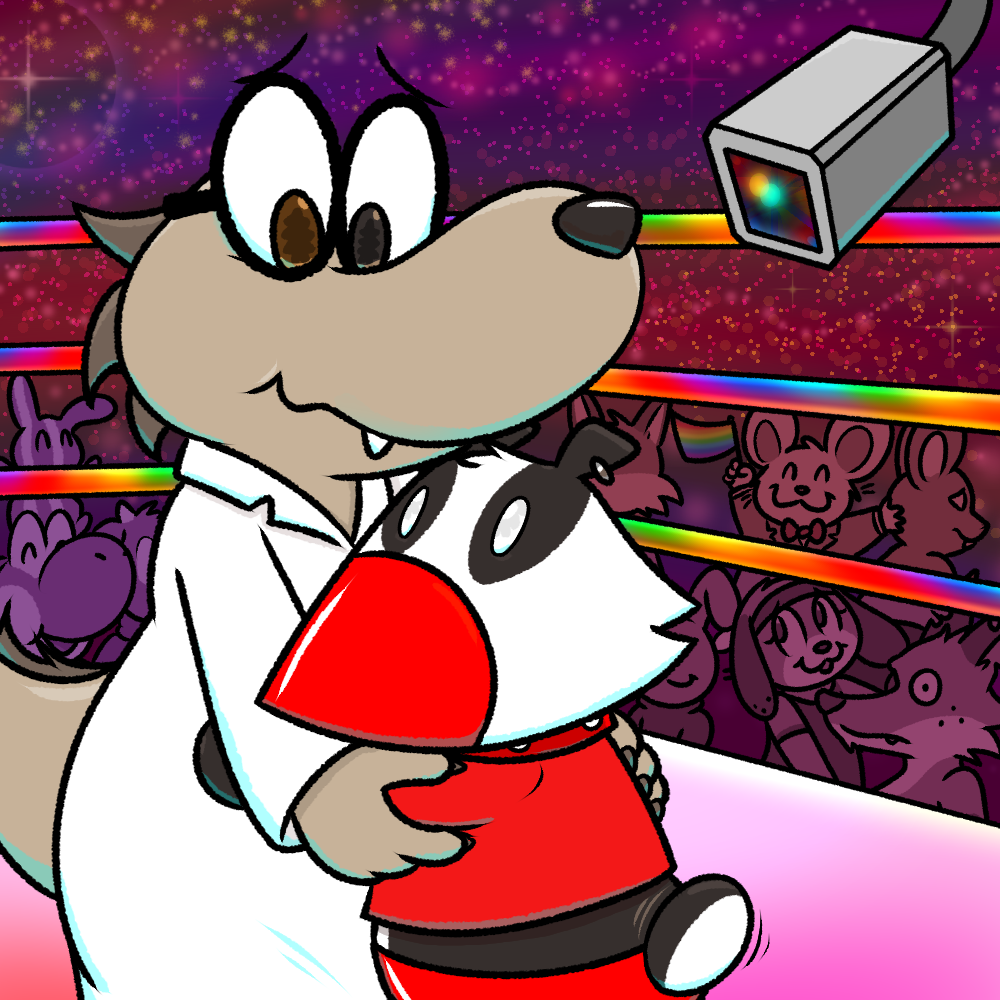 “Somebody call a doctor - Bushy Beaver’s fists went into some weird places!” the hamster announcer laughed, waking up the audience.
“Nothing ash weird ash yoursh go on a daily bashish,” Bushy snorted, dusting herself off after their fight. “Up nexsht... ish a doctor! Get ready to meet Dr. Ama and Yuaad.” She paused, “Oh, I shee what you did there in your introductshion, Oxsh.”
“Did you like it?” Oxnard raised his eyebrows.
“No. Call a doctor, it made me shick.” Bushy was layin’ the insults thick.
“Oh yeah? Call a doctor, because I’m about to call a lawyer, because your doctor is...” Oxnard lifted up Dr. Ama’s card, “Not a real doctor!”
Bushy covered her mouth in a gasp.
“Well, sorta. They’re half real doctor, half fake.” Oxnard clarified, “Dr. Ama is a unique person - in that, they’re more than one person, they’re two.” In the boxing ring was one figure, who looked like a dinosaur dressed up as a wolf. They had thick dinosaur hips, but a long, fuzzy wolf snout. Their thick, nerdy glasses and lab coat made them look like a scientist - maybe this was some weird mutation they did to themselves.
“Sho, which one’sh the doctor?” Bushy questioned, for the sake of the audience.
“Uh, the one named Dr. Ama,” Oxnard sassed, “I thought that was obvious.”
“No no! The dinoshaur half, or the wolf half?”
“Any species can be a doctor, Bushy. The time to end your prejudice is now.”
“You know that’sh not what I wash shaying, Oxsh.”
“Oh really? You’re always saying I’m not a doctor either.”
“That’sh becaushe you’re not! Impershonating a doctor ish a real crime y’know.”
“Don’t worry, I’m the police, I can’t commit crimes!” The hamster adjusted his big red bow tie before leaning into the microphone, “So which boxer will be sending this doctor to the hospital today?”
“You will!” Bushy pointed towards the camera.
“Uh, me? Who you talkin’ to?” Oxnard asked, out of the loop.
“The viewer, the one checking out Boxsher Beatsh right now.” Bushy smiled to the camera, her bucktooth whistled as she spoke. “They can only view the competitshion through the camerash, sho they’re limited, but we’re having them particshipate.”
That’s right, you’re the one viewing, reading, or listening to Boxer Beats right now. You’re the audience inside the camera, another face in the crowd - a mystery!
“No one told me about this...” Oxnard frowned before turnin’ around, “What do they look like?”
“Look in the ring, you’ll shee!” Bushy smiled, pointing to the boxing ring with Dr. Ama and a boxy-looking camera.

“...Why are we fighting a camera?” Dr. Ama and his wolf half, Yuaad, tilted their head, looking closer into the lens. “Does it transform?”
Your camera did nothing.
Yuaad leaned her half of Dr. Ama’s body toward your camera to see for herself. “Iiiiis this a fair fight? Dr. Ama and I are two, but this camera is one. This isn’t a one-on-one match, is it?”
“Well, if this is a camera...” Dr. Ama pondered, “Then it’s likely someone else is watching this! Hello, is somebody there?” He asked towards the lens.
Your camera still didn’t do anything.
“I suppose even if someone is there, maybe they’re only able to watch?” Dr. Ama poked the camera on the ground. “But then why enter it as an opponent here?”
Yuaad shrugged, “Maybe to throw us off?” She set her foot on top of the camera. “Referee, Sweaty Beaver. Could you start counting?”
“Sure thang!” The beaver chuckled, “One... two...”
Just then, a fat, shiny thing wrapped in wires rolled onto the stage, knocking the camera out from underneath Yuaad’s foot.
“Golly, nevermind! Guess the fight’s on?” Sweaty Beaver sunk back behind the ring as a mysterious figure stood in front of the camera. It’s your teammate!
“Hey, I’m your teammate,” said your teammate. “I will protect you.”
Dr. Ama and Yuaad felt the fat ball of wires sit on their foot, “Oh goodness, this thing is heavy!” The pair’s body fell back. “What are you?”
You watched as your teammate fought back the furry dino-nerd for you, “I fight for those who cannot. I help the helpless. Love the loveless. Eat the hungry. Bang the-” as your teammate ranted on, they picked up your camera and fled the ring. “This is for your own safety. Later, suckers!”
Just as mysteriously as the cold winter turns into a blazing summer, your camera and teammate vanished.
“Well um...” Sweaty pondered, “Ah guess that’s that? One... two... thray? Are we done?” Nobody answered the beaver so he shrugged, lifted Dr. Ama and Yuaad’s body up, and gave them a piggy back ride around the ring. “Y’all two did it! We gots winners, Drama-mama and Your-dad! ‘Gratulations.” He butchered their names, but they did get a fun piggy back ride out of it, so they couldn’t really complain.
Bushy Beaver suddenly grabbed the microphone. “Gee, that wash quite a match!”
“Was it?” Oxnard hopped back into his chair. “I was in the bathroom so I missed it.”
“Oxshnard! You’re shupposhed to be in charge of theshe thingsh!” Bushy huffed, before sounding guilty. “I uh, alsho left during the match. Shome weirdo tried to shteal the camera I put down there for the audienshe to ushe.”
Oxnard went wide-eyed. “So no one was in the booth talking during the entire match?”
Bushy looked towards the camera with a nervous grin. “Do ya think anyone notished?”
“Two amazing announcers like us!? Of course people noticed! The fight was probably so boring, the people were craving us being there to liven it up!” Oxnard threw some important papers at the booth’s window. “We didn’t even establish a clear gimmick for this fight, Bushy! And quite frankly, I don’t even know who won.”
Bushy looked out to the ring, where Dr. Ama and Yuaad’s body was cheering happily on top of Sweaty Beaver’s shoulders. “It looksh like they did.” Bushy pointed out beyond the booth.
The announcers sat back and watched everyone cheer. It looks like sometimes the show could run itself! It was sorta nice and relaxing, knowing that not everything depended entirely on the two of them.

As the night started to settle, the boxers from the past few days gathered around - some friends reuniting, others meeting each other for the first time. Dr. Ama had been looking forward to seeing his old friend, Dr. Don Badge, after their busy lives kept them apart for years. But when Dr. Ama heard that Don was in jail, and only let outside during battles, the doctor was very disappointed. However, word got around that one of Dr. Ama’s major reasons for joining the tournament was to see his old friend again, so someone helped him out!
“Oh, Dr. Amaaaa...” Oxnard’s voice teased.
“Yes, Oxnard?” the polite doctor and Yuaad looked over to the hamster host. As the short, chubby critter stepped aside, another short, chubby critter appeared behind him. With a big toothy smile under his large red nose, it was Don Badge, the crazy badger! The two doctors whimpered nervously as they stared at each other from a distance, as if they were lovers being reunited for the first time in a century.
In college, Dr. Badge and Dr. Ama didn’t have many friends, and after Dr. Ama graduated, he and Don became pen pals. They wrote letters to each other with all their adventures and hardships. They bonded and trusted one another with the scariest secrets of their lives. Dr. Ama and Yuaad ran right over to Don, lifted him up in a big hug, and started spinning around. It was the amazing feeling of meeting someone in person after years of only knowing each other though text. Dr. Ama felt like he could almost kiss Don and it would feel perfectly justified.
“Don!” Dr. Ama smiled, clasping him closely. “You’re okay...”
The badger laid his head against Dr. Ama’s chest. “Dr. Ama... Don’s friend.”
The doctor sighed, “After everything we’ve been through, we made it. And we’re finally together in person.”
All their friends happily clapped and cheered. The two looked into each other’s eyes deeply before finding a place to sit and chat now that they were reunited.
Oh yeah, Yuaad was there too. But she knew how they felt about each other - Dr. Ama couldn’t hide feelings from her. She barely had friends either, so she was quite excited too!
In an area that wasn’t as emotionally exhausting, Chris and Kiwi from Team Arthbound talked to Goatella and her family. Goatella felt a little odd around the pair that beat her son’s team, but they all talked and apologized. Looks like everyone was getting along! Sotelo’s energetic side came out as he chatted with the cheerful dalmatian. The quiet cats, Blue and Chris, quietly nodded as their friends got acquainted.
Even the twin peanut butter puppies from earlier joined in - apparently, they were friends of Sotelo, Blue, and Dr. Ama too! The girl puppy, Cherry, was actually a psychic - one of the many that helped make Dr. Ama and Yuaad the pair that they are today. And Marcus the religious fur, who exposed his deer bits on the trampoline earlier, studied at the same school as Cherry. The group started realizing how intertwined they all were. Bits of history, common friends - it made them all feel like they were part of something larger.
And then, sitting alone (except for the police guard that had to watch over him at all times) was Anger Mouse.

And then Ama and Don kissed

Hehe, well we can say some edits made this a bit more tame than it originally was~!