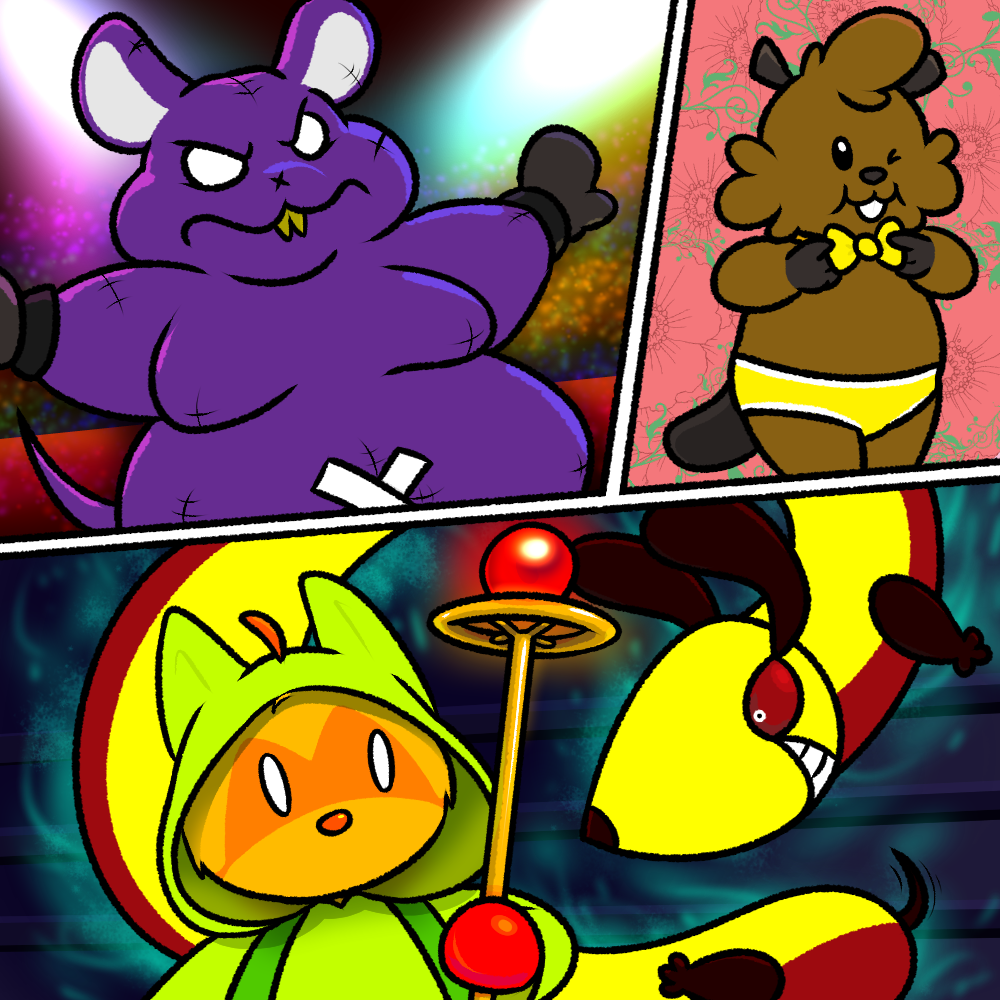 Anger Mouse may have felt alone, watching everyone around him talk to new friends. Even his closest friend, Don Badge, found someone that he seemed to treasure more. But while Anger’s eyes were on Don, someone else’s eyes were on him.
Those eyes were behind the mask of a partially-female tanuki, named Nikki. She was short, round, and orange, but cloaked in apple green. She kept a close eye on Anger Mouse’s butt. She could tell there was something strange going on there. And now that he was alone, she could see him herself. She approached quietly.
“Anger Mouse...” she eyed his chubby mouse body up and down, “Are you pregnant?”
“WHAT!?” A loud mouth mouse reacted, “I’M NOT PREGNANT, LADY. ARE YOU A PREGNANCY LADY, LADY?”
The shady lady smirked, “Not exactly, but I’m asking you. Is there something strange going on with your... body?” She knew something was off, but that’s not the kind of question anyone wants to be asked.
“UH, NO. MY BODY IS REALLY... NORMAL.” The all-caps rat responded. He was getting very defensive about his weird body. The guard watching him quietly kept an eye on the two.
“Let’s see what happens when I do this...” Nikki reached back into her fluffy tail and pulled out a golden wand. It had a flat, circular shape at the top, and she pressed it right against the mouse-rat’s tummy. Anger Mouse suddenly felt his belly inflate, but it stopped after a minute. Now he really did look pregnant.
“WHAT DID YOU DO TO MY STOMACH!?” Anger Mouse suddenly felt like he was carrying something heavy inside of himself. Since he’s a plush doll, it would normally just be fluff, but this fluff grew and expanded, it was starting to weigh him down.
“Hey, you can’t just do that!” Anger Mouse’s guard stood up, finally starting to do their job. Everyone that had gathered to hang out started to look at Anger Mouse.
“It’s alright, don’t freak out...” Nikki nervously replied, seeing everyone look at her like she’d just attacked the little guy. “There was already something inside of you, Anger Mouse. All I did was wake it up.”
“WAKE IT UP? WAKE WHAT UP?” The mouse hopped to his feet in a panic.
“I don’t know. But someone, either accidentally or intentionally, is in your fluffy plushy stuff. Don’t you want to find out who?” Nikki curiously asked.
“I WANT TO BE LEFT ALONE. LET’S GO.” Anger Mouse took the hand of his guard like a little kid and stomped off.
The guard called out to another, “Can you get that tanuki’s information?” Everyone stopped and watched silently. It was a really awkward situation, but Nikki calmly handled all the guard’s questions. As Anger Mouse left, Don Badge left as well, saying goodbye to the gathering.
“What did happen?” Don questioned his friend with concern.
“I DON’T KNOW... BUT I MIGHT BE PREGNANT.” Anger Mouse pat his tummy. What the fluff was going on inside there?
Nikki would have to wait a whole night to see the results of Anger Mouse’s belly situation. If something wakes up, and it feels stuck in his body, it’s going to try and get out! Thankfully, Nikki wouldn’t have to be there to watch since the mouse would be in jail over night. Or so she hoped.