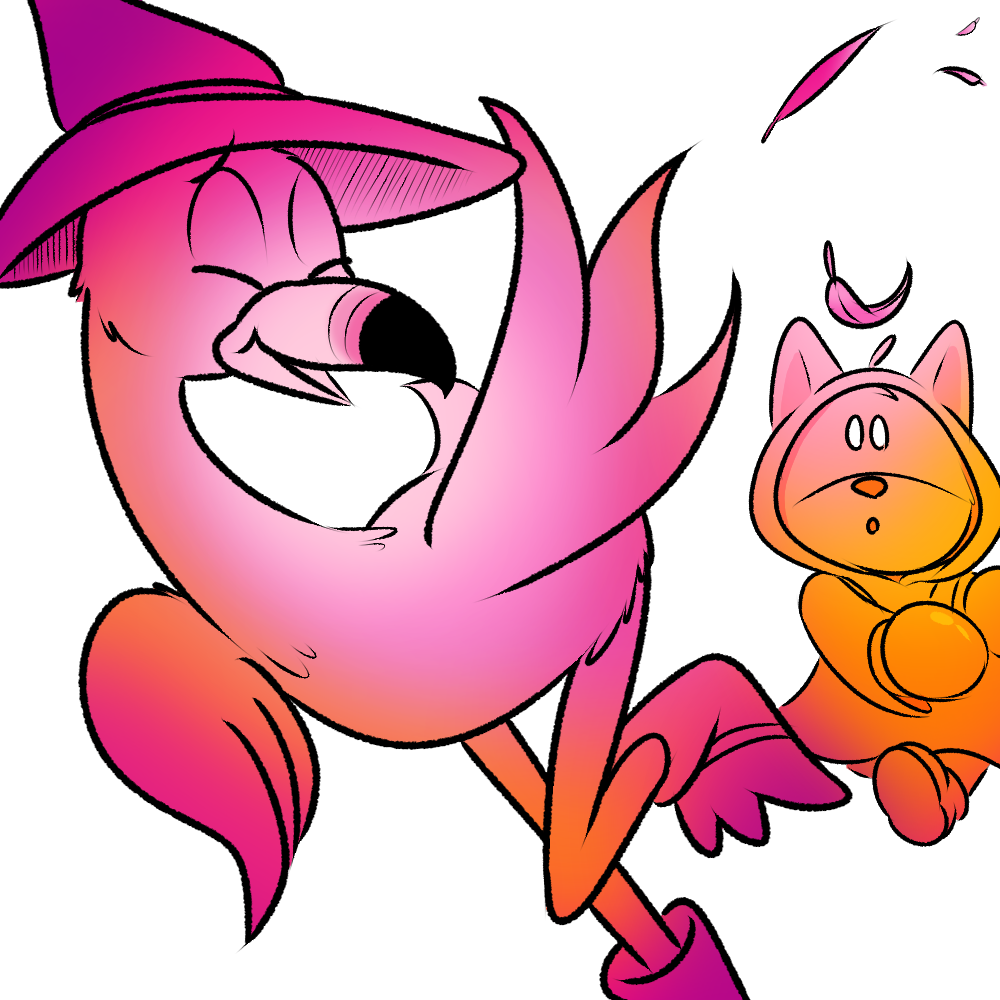 Dawn and Nikki spent all night on the roof of the Boxer Beats building, making plans together. It was like a typical sleepover with friends - only one person shows up, nobody orders pizza, there’s nowhere to sleep. It was great!
The girls went ahead and made a list of their friends. Dawn didn’t have any friends, except for Nikki. But Nikki had a lot of friends! However, the list didn’t seem too big, so she included friends of her friends. And as they considered what the list was about, they included some people that weren’t even friends of their friends, just boxers that were interesting! Sadly, you did not make the list.
“Alright, I can’t think of anyone else that’s cool or interesting.” Nikki thought out loud, tapping her chin. Maybe she hadn’t remembered you yet! “Everything from the glue fight, the trampoline, the protest, the camera fight...” Oh, okay. She did consider adding you to the list, and didn’t.
“Camera fight?” Dawn questioned. Oh! Maybe this was your chance to make it o-
“It was lame. They made someone fight a camera and said it counted as a tag-team because the audience was watching.” Nikki lifted her snout, unimpressed. “The camera didn’t even do anything. They set it up to lose. It doesn’t count as a person.”
Dawn was writing you down on their list as a friend!
“Don’t do that!” Nikki leaped on her shoulder, crossing your name off the list. “You know how hard it’s gonna be to make them win Boxer Beats?” That was it! That’s what the friendship list was about. Everyone that counted as their friend was someone they were going to help win Boxer Beats.
“It’s only fair.” Dawn smirked.
“We’ll see. But for now...” Nikki smiled, holding up their friend list. “I want to see what it’s like when all these people win. I want all my friends to smile. I want to make up for my selfishness. And I want to DO IT...” she leaned in, wrapping her arm around Dawn’s back, “with my new buddy.”
Nikki then took the list and wrote Dawn’s name at the very end. “There you go! You’re one of my friends too, Dawn.”
“You want to. See Dawn win. Boxing thing?” The ghost dog was surprised - they were just a sleeping spirit all this while. Making a new friend, and trying to be a good boxer was a lot, but it was a pleasant surprise!
“May as well, I’m on here too.” The tanuki girl folded up the list and set it down behind her. “If you want to.” The pair looked out to the end of the city. It was early in the morning, the sun started to rise. “Gosh dawn-it, Dawn, it’s the dawn.” The girls snuggled together, in a cute, gay kind of way, watching the sun sneak up behind the city buildings. The sky started glowing orange and pink colors. Dawn realized for the first time that she was named after something beautiful.
“So, the plan is...” Nikki looked over to her partner, “we’ll start over from day one and go through the list, name by name. We’ll help every boxer beat everyone until they’re the one that’s won. And when we’re done going through the list, we’ll reset one more time and let nature take its course, see who wins on their own.” She smiled down at the hot dog, “Does that sound like a fun way to start spending your time awake, Dawn?”
Dawn shook her head, nodding, agreeing. She approved of the idea. It was a good one. She liked it, so she made sure to show the behavioral gesture that indicated exactly that. “Yes.”
Nikki pat between the dog’s ears, “And whenever it seems like a good time to restart, we’ll meet each other back up here and enjoy the sunrise together. Or we can crash at my friend’s house! We don’t have to sleep outside.” Nikki realized, by spending these last few hours with Dawn, her friends might wonder where she is! But if they were going to reset, it wouldn’t really matter.
Dawn spoke up, “And if. Anything goes wrong. Let’s meet here.”
“Or settle it in the ring!” Nikki piled her round little body on top of Dawn playfully. “By the way, if we’re starting from the beginning, do I need to wake you up again? Are we gonna remember everything?”
Dawn nodded, “I think so. I always remember. When I return. I know. That I reset.” Well that works, otherwise Dawn would probably redo everything just like she did, and loop endlessly. Some information has to stick with every reset.
Nikki started to think more in depth about how everything works, but stopped herself. She was more the adventuring type that liked to figure things out along the way, rather than talking herself out of doing fun things.
“So, when we reset, let’s try and look for each other, and go from there!” Nikki proclaimed, ready to begin.
“Okay,” Dawn smiled, wrapping her long, noodly, hotdog body around the tanuki. “Dawn the dog. Will see you. Soon...”
Nikki started to pass out, shortly followed by Dawn herself, as the two surfaced back to when the competition all started.

Nikki woke up in a new place. It was her friend’s house! The one she mentioned she could stay at with Dawn instead of sleeping outside. Here she had a nice cozy bed and a cute little room, just her size!
“You up, dude?” her roommate asked through her door, giving it a little knock.
“Huh? Yeah. Give me a moment, I’ll be out.” Nikki stretched with a yawn, wiggling herself back in bed. She knew there was stuff ahead to do, but she took her time waking up. Beds were too warm and cozy to ever want to leave.
But eventually, reality sets in.
Nikki hopped out, got dressed, and went to chat it up with her birdy roommate about the day ahead. They were planning on going to the Boxer Beats tournament today! There were so many people they were looking forward to seeing. Well, Nikki was. Her friend Thanksalot, not so much.
Thanksalot was a pink flapinko bird. They had long, skinny legs that bent all weird, and a hot pink witch hat, because this bird was a witch! A bird witch. A bit-
To most, Thanksalot seemed calm and graceful, with hundreds of years of wisdom hidden in their past. However, around Nikki, Thanksalot could be themselves - a bit more nervous and nerdy as a birdy. Hard to act mystical and mysterious when you shared a home! Boxer Beats was far from Thanksalot’s style, but they’d follow Nikki anywhere.
“Are you sure about this, Nikki?” Thanksalot asked, worried.
“It’s just a boxing competition! It’ll be fun.” Nikki smiled innocently.
“I dunno dude...” The wise witch warned her.
Nikki grinned, “It’s hard to take you seriously when you call me dude, dude.”
Thanks pouted, “I’m only trying to be more masculine for your sake.”
Nikki shrugged, “It’s okay. I don’t try to act like more of a girl just because I’m in this body. You don’t have to act like more of a dude in yours, dude.”
The two headed out together, ready for a big day ahead! But Nikki started to feel strange. Everything felt familiar to her, like déjà vu. She noticed it more and more as they got to the stadium. She remembered what felt like a dream before she woke up this morning. Maybe that was it? She must have dreamed about the competition, and it was so close to reality that it was surprising her.
The two enjoyed watching the starting performance with dancing rodents. It made Nikki giggly as she peered forward, and tried to get a good look as they stripped. But... it felt like she’d done that before.
When the audience quieted down, Nikki whispered towards her birdy roommate. “Hey... Thanks, does this feel weird to you?”
The bird nodded, starting to get out of their seat. “Yeah. You’re right, let’s leave.”
“No, no!” the tanuki put her paw on the bird’s. “Stop. We’re staying here, but... something feels weird to me. Like, this is all familiar.”
“Oh, you mean déjà vu. That’s that thing where you feel like you’ve already seen stuff before. Don’t worry, it’s normal.” Thanks sighed and sat back down.
“Noooo. Well, maybe.” Nikki felt really confused, “I just... have been feeling that way since we got here.” Nikki looked down in her seat, regretting how weird she must sound. Thanksalot looked down at her and rubbed behind her back.
“Oh, dear, come on now. It’s okay.” Thanks reassured her, “I mean, boxing competitions are predictable. We were here when we registered ourselves in the competition, and I’m sure we’ve both been dreading showing up.” Thanks started recounting all their worries, “Like, I kept stressing about having to fight, or getting hurt. Even if we probably won’t fight, I’ve been paranoid anyway.” They smiled through their beak, or... maybe their cheeks? How can birds smile if their beaks are hard? It’s probably the cheeks.
Thanks continued, “But maybe it’s something more. Either way, I believe you.”