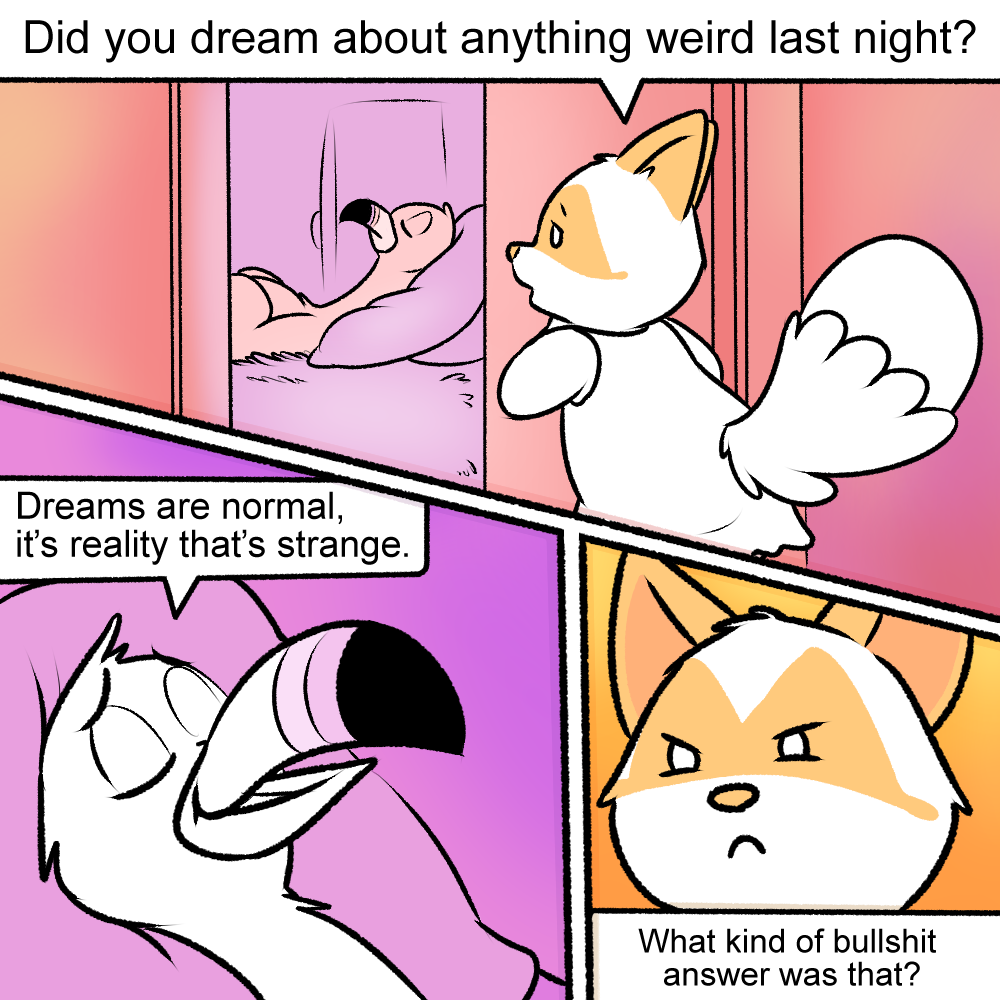 This was the third reset. The first reset was a simple test of Dawn’s ability. The second was an organized plan with Nikki. The third one... didn’t quite have a direction. It just happened in the moment? Dawn wanted to show everyone that she was the one resetting the competition, but she didn’t exactly mean to send them all back to the first day again.
No more waiting around! This time Dawn was going to go straight to Nikki.
The ghost dog snaked her way out of Anger Mouse’s over-stuffed belly and... realized... she didn’t know where Nikki stayed before Boxer Beats.
Okay, so maybe there was still some waiting. She did fly around the city in anticipation, but Nikki was having a rough morning.

“Ugh...” the tanuki moaned. She looked around in her little bed. “Wasn’t I just outside?” Nikki remembered a little more this time. “Yeah... I was there with Thanks. We were on a building together, and...” things started to grow hazy as she tried to remember what happened moments before.
“That had to have been real... I know I was awake, and thought I dreamed of everything that already happened. And then someone admitted that they were doing that to me.” Nikki looked down at her fuzzy orange legs and cute little toes. “Someone is doing this to me... but I don’t know why they keep sending me back.” Thanks was there with her! Nikki realized, she could ask Thanks if they experienced the same thing. She dashed on over to her roommate’s room.
“Hey, Thanks! Did you dream about anything weird last night?” Nikki asked in suspense, peeking into her friend’s room from behind the door.
“Dreams are normal, it’s reality that’s strange,” Thanks smirked. What kind of bullshit answer was that?
“Stop trying to be deep, that’s what your throat is for.”
Thanks covered their long, birdy neck with their wing - looking quite offended! “WELL. No. I don’t remember what I dreamed about last night.”
“Hm. Okay,” Nikki nodded, “I think something’s going on... I’m gonna go out for a little.” The tanuki then ran out of their home and headed right to the boxing stadium. Whatever was going on, she wanted to stop it as soon as possible!

Nikki could see the stadium, and on the roof top she spotted a spirit watching her. The spirit flew down, and she got a closer look at it. The long, snake-like body was creepy. Her red eyes and sharp nose didn’t look very friendly. To be fair, the creature was smiling, but it had pointed teeth that looked like they could rip her apart. In reality, Dawn looked just the same as ever! But in Nikki’s mind, her appearance, paired with Nikki’s scepticism made Dawn appear deranged.
“I know what you’re doing!” Nikki yelled out, “Why are you doing this to me!?”
Dawn was so happy! She knew! Nikki finally knew what was going on. “Oh! Joy. Finally. I was worried.” Dawn laughed, “I thought. You might never. Figure it out.”
Nikki had barely figured out anything.
“Now we can start,” Dawn smiled. To her it was innocent, but Nikki took it all as an invitation to fight.
“Tell me what’s going on.” Nikki demanded, pulling out a golden staff from her poofy tail. “How many times have you done this to me?”
“Only three,” Dawn grinned with guilt, “The last one. Was an accident. I think.” She pulled out a piece of paper from her stitching, “Here it is. This is... The plan.” She leaned down and handed Nikki the folded note.
The confused tanuki read through the writing on the paper, it was a list of names. “What’s this? You’re doing this to all of us?” Nikki was on edge. It looked like a list of victims.
“Yes. We’ll do it. For everyone!” Dawn was excited, ready to help make everyone on that list win Boxer Beats. Too bad Nikki didn’t quite remember that part of the resets. The two completely misunderstood what was going on, and Nikki jumped into action.
“I won’t let you!” The short tanuki leaped into the air, swiping her wand at the dog. Dawn used her snake-like body to dodge the hit. She didn’t know what was going on.
“Stop! Do not hurt!” The dog-snake backed up into the air, and saw a familiar face run in.
“Nikki! Dude!” It was Thanks, “I’m here to help you!”
“Thanks for being here, Thanks.” Nikki smiled, glad to finally fit that in.
“Come on dude, this looks serious...” The flapinko bird stood behind their friend defensively, a wand of their own raised in the air, pointed directly at Dawn.
“Nikki...” Dawn gave a heartbroken sigh. She raised herself further up towards the roof. “I told you. I reset you. Three times.”
Everything started to feel hazy.
“Let’s try again,” Dawn closed her eyes.
“No! Not again!” Nikki jumped up to attack.
“Reset number four...”
Nikki felt weightless in the air as they reached out towards Dawn, and suddenly their body crashed to the ground, waking up in bed.