#18 - The Truth Behind Nikki - in Reset Number Four 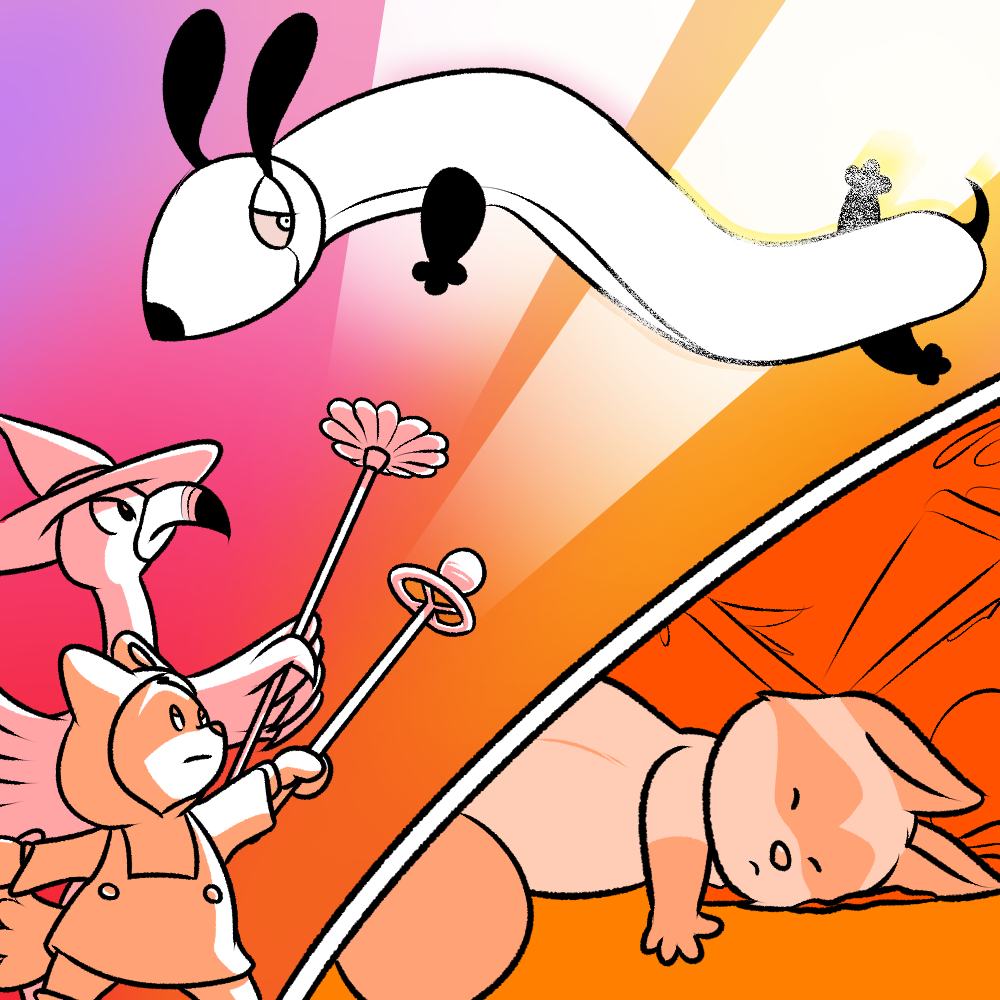 “SON OF A MILF,” Nikki yelled, seriously super peeved off. She pounded her fist against her bed sheets. “I knew it! There’s something going on!” But what could she do? She thought to herself, and looked down - there was a piece of paper in her bed. It was the list of names!
But she didn’t know what the list exactly was for. She noticed her name on there, most of her friends, some near-strangers, and even...
“Thanks?” Nikki’s brain was trying. It really was. She thought, she sorta remembered... before all the haze... this might be a list of victims. These could be all the other people that were being reset, just like her. “But Thanks never remembers it when I ask her...” Nikki moaned, disappointed.
She might as well check again, walking over to her roommate’s bedroom door, asking, “Hey, Thanks? Anything weird happening to you?”
The birdy sat up, looking around their room, trying to notice if anything was off. “Uh, no... I don’t think so, dude.”
“No weird dreams? No fights? I wasn’t in them or anything?” Nikki realized how weird she was starting to sound.
“Did you, uh... want me to dream about you?” Thanks awkwardly asked.
“You don’t have to, it’s fine...” the tanuki huffed and sat on the ground. “Can you come with me to the tournament early? There’s something I need your help with...”
Despite not wanting to even go to the tournament, Thanks yet again, agreed. “Of course, Nikki. What’s wrong?” The two got ready to head out, and Nikki told Thanks everything that had gone on so far.
“Really?” Thanks was surprised - not at all aware of any battles or resets. “That’s crazy,” they chuckled, before patting on top of Nikki’s head, “but I believe you.”
“You always believe me when I tell you.” Nikki paused for a moment. Despite every reset being different, some things were constant. Thanks always believed her crazy stories, and most recently, helped protect her, and fight with her.
“I’m glad I do. I always want to.” Thanks felt a little proud.
Even if Nikki was alone in this, having Thanks’s trust made her feel less nuts.

As Thanks and Nikki arrived at the stadium, both their wands ready for whatever was ahead, they saw the long dog’s spirit on top of the stadium’s roof. Her back was facing them. The ghost turned their head to look at them for a moment, before turning away.
“Do you think that’s it up there?” Thanks cautiously checked.
“I don’t know...” Nikki froze. She thought back - she could remember talking with someone in this place... but she didn’t know who it was she talked with.
Dawn let her body fall backwards off the top of the roof - slowly floating down, her body limp and noodly. She was dreading having to approach these two again.
“I’m sorry...” Dawn began, “Please. Don’t be mad.”
“Sorry that you’re caught,” Nikki huffed, in a world of her own misunderstanding. Nikki and Thanks pointed their wands at Dawn, blasting harsh light towards her body. Dawn curled her body close to dodge it and dashed into the air. The pair kept trying to attack Dawn, who kept dodging their hits. She wasn’t fighting back.
“Are you going to keep sending me back!?” Nikki yelled up at the ghost.
“It is what! You! Wanted!” Dawn gasped. She could have said no, but it wasn’t the case. There were so many things she wanted to say. She wasn’t exactly in power any more, the rules were already decided. “Use the list. To stop it. It is tied. To the reset.”
“That list?” Nikki thought, searching her empty pockets. “Noooo! I left it at home...” It was really easy to forget important things back at home. A truly human experience, this was a large part of what contributed to all problems in this society of animals.
“Please. Get the list.” Dawn begged.
“And do what?” Nikki shot back.
“Make each one... Happy.” Dawn started to drift away, “I will not. Reset you. If you. Make them happy.” The dog was getting hard to see as they flew up higher like a lost balloon, “You and I. We are friends.”
Thanks and Nikki looked at each other. That was a lot of serious stuff! And seriously vague.
“We don’t have to bang everyone on the list, do we dude?” Thanks wondered.
“Maybe that’d be the fastest way to make everyone happy...” Nikki humored her idea, “but your name’s on the list too. I ain’t touchin’ that.”

The two travelled back to Thanks’s home to get the list. After looking through all the names on it, they realized this might be an easy task.
“Most these animals are involved with the boxing competition...” Nikki realized. “So at least we’ll be working all in one area.”
“It might not be an easy task,” Thanks thought, “if they’re all in the competition, they all probably want to win. But since only one person can win, we can’t make them all happy.” Nevermind. Now they realized, it wouldn’t be easy.
“Well, maybe most of them care about things other than boxing. I bet there’s something more important to them.” Nikki grinned, “Besides, some of them aren’t even in the competition.” Now it was starting to sound easy again.
“But what if we have to make them join the competition and win?” Thanksalot made this hard again. “You have to do it one person at a time and then reset, right? Or do you have to squeeze in everyone being happy all in the same tournament somehow?”
“I don’t know which of those sounds worse.” Nikki folded up the list, “But I know how to start this!”

Nikki and Thanks set up a video booth to interview people on their list one by one. Their plan was to find out who was supposed to win the competition, and as a back up, what would make them happy even if they lost.
The two of them sat in the booth together, testing out the camera.
“Let’s start with the easiest two,” Nikki stated. She sat up straight and puffed out her chest, “Me and you!”
“You and I,” Thanks corrected her.
“It would make me happy if you let I speech the ways me want to talks.”
“It’d make my ears happy if you didn’t talks that way, dude,” Thanks huffed.
“It’d make this dude happy if you didn’t say ‘dude’ so much.”
“It’d make me happy if you shut your face!” Thanks yelled, before the two started to look sad. “Oh, I went too far. I’m so sorry.”
“I’m sorry too,” Nikki leaned in and hugged her.
“I’m the sorriest mother fucker.” Thanks pat on her back.
“WOW, watch your language,” Nikki gasped, covering her little ears. “We’re on camera for Fuxie’s sake. Aaaanyway! We have to decide what would make us happy if we won or lost the competition. At this point, I’d like to be out of the reset, whether I win or lose. I honestly don’t care about winning, so I don’t think I’m supposed to win.” Nikki looked over at Thanks, “How about you?”
Thanks put her wing to her beak in thought. “If I win... I’d probably buy more stuff for my witchcraft with the money. But...” she looked over to Nikki, “I really care more about waking up my tanuki pet... and, still being close with you!”
“Oh,” Nikki looked down. “Thanks, I’m sorry.” They had a bit of a complex situation - the truth behind Nikki. Thanks had a pet tanuki at her home, but the tanuki got hurt. She didn’t die, but she wasn’t responsive. Thanks used her witchcraft to try and wake up her unconscious pet, but it failed. Then she got the spirit of a friend, Nishidor, to enter the tanuki’s body and try to wake her, but it didn’t work. So, Nishidor has been staying in the tanuki’s body ever since, hoping one day the animal would wake up again. Nishidor insisted everyone calls them by the tanuki’s name, Nikki, so the animal would have an easier time adjusting when she wakes up again.
However, once the tanuki wakes up, Nishidor will leave their body, and Thanks won’t have them as a living friend anymore. What she truly wanted was to have both of them in her life. It wasn’t something that Boxer Beats could fix.
“One idea I had,” the tanuki started, “was that if I compete, and get hit in the head really hard, it could wake her up again.”
“It’s okay, Nishidor.” Thanks closed her eyes, “We’ll figure it out eventually. But first I want to help you out of this reset. We’ll worry about Nikki after.”
“Let’s brighten things up and interview someone funny!” the little tanuki grinned and held up the list. “I’ll even let you pick.”