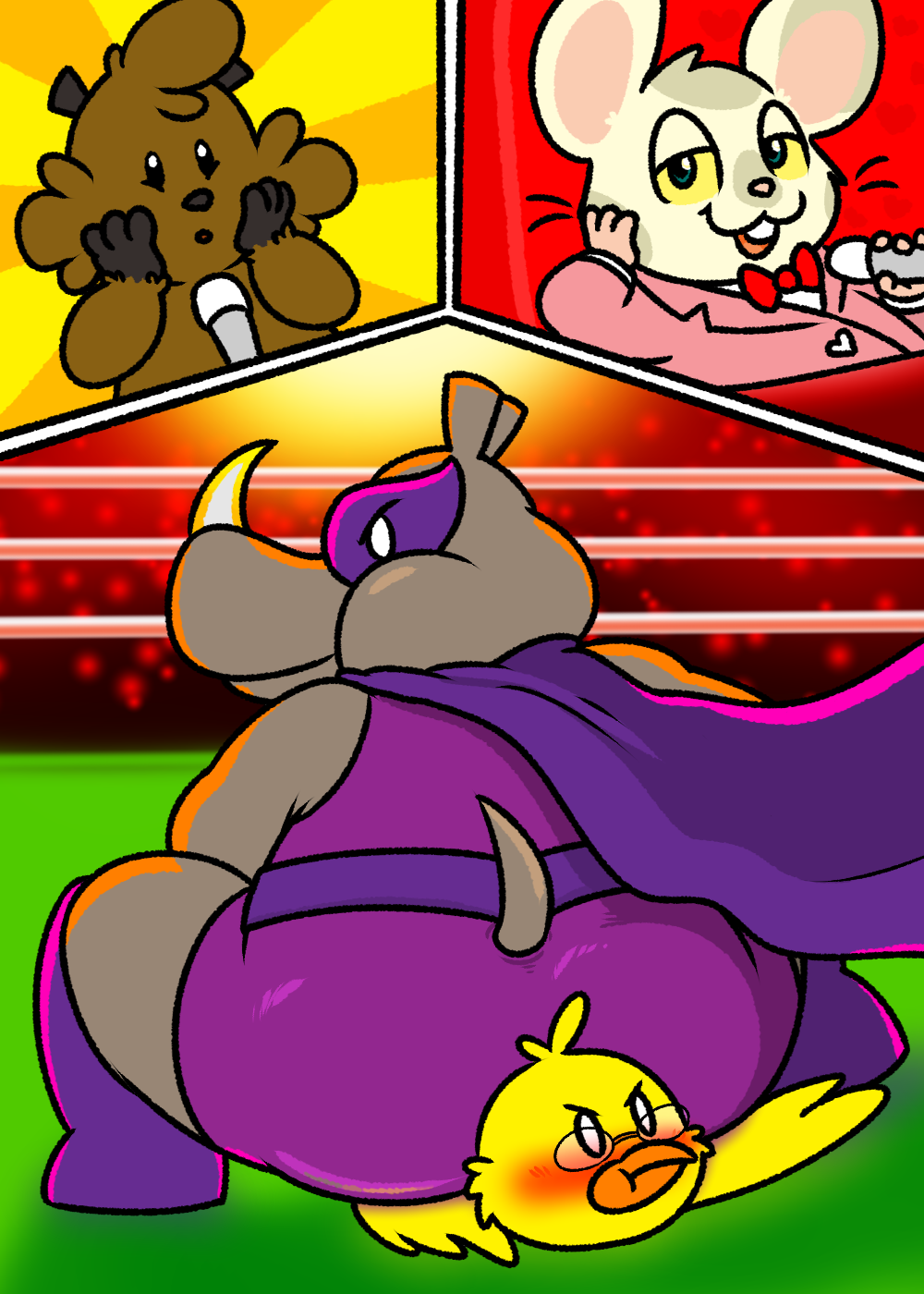 A turquoise hummingbird flew onto the stage wearing a referee shirt. His long, skinny legs were easy to see because he wasn’t wearing any pants. This was Aro Usal - the ref for all the one-on-one matches.
“Gosh! I uh, let’s get, let’s do, it’s time for the... the um!” Perfect. Great start to the first match, Aro. The pressure was on. Now all he had to do was count from three to start the match. “One,” okay, guess he wasn’t starting with three. “Three,” there it was? “Two,” oh for crying out loud.
“GO!” Belted out Oxnard from the announcer booth, since Aro had clearly forgotten how to count.

The fight starred a large rhino, wearing a tight purple super hero costume. Her opponent was a small, macaroni-colored penguin. From the looks of the giant and tiny boxers, it was clear the little birdy wasn’t going to win.
“Sho, what makesh thish battle unique, Oxshnard?” Bushy Beaver asked.
“Oh, right! Since every boxing match is more than just a fist-fest...” Oxnard stalled as he thought, “this match, the boxers can’t fight using their hands!”
The crowd made a collective confused noise, as if they tried to imagine a fight without punches.
“Ha!” quacked the little macaroni bird. “So much for those big, strong arms, lady!” The penguin jumped around on its feet, almost like it was tap dancing.
“Won’t need ‘em,” the giant rhino crossed her arms, turned around, and sat right on top of the tiny yellow penguin.
“Noooooooooo!” cried the penguin from under the big rhino’s butt. “Stop stop stop! Get off!”
“I bet someone could get off right now...” Oxnard eyed the camera.
“One...” The referee started counting down.
“Don’t start counting! We’re both birds. Help me out!” Macaroni shook her head at the hummingbird ref, trying to persuade him. The rest of her body was caught under the purple latex cheeks, she couldn’t move!
“Two...”
“Oh, so NOW you know how to count properly.” Macaroni huffed, offending the referee.
“Hey! It was a mistake.” The long hummingbird’s beak frowned.
The heavy rhino grunted on top of the squished penguin, “There’s no need to belittle, Mac.”
“Three three three! Whatever! I don’t care, I quuuuuuuuuuit!” belittling Mac screamed from under the big butt. “Get me out of here before she does anything gross.”
The crowd clapped - at least, the ones that had both hands free.
“Wow! Uh, so it looks like Queen Rhino beat Little Macaroni out there...” Oxnard announced, feeling confused.
“We didn’t even get to shay the rulesh yet,” Bushy Beaver whined. “Macaroni, wait! You can loshe a fight, it doeshn’t mean you’re out of the competitshion!”
“Oh, I’m out of the competition. I quit! I don’t want to come back! I’m way too old to be getting squished underneath big rhino butts.” Macaroni folded her arms, raised up her beak, and walked right out of the ring.
The hamster host’s voice teased through the speakers, “It looks like someone is going to miss out on the grand prize of... thirty dollars.”
The crowd went NUTS. Thirty dollars!? They couldn’t believe it. Whoever won was going to be rich! And without even having to fight for it.
“Wait, thirty dollars? I changed my mind! I’m still in!” Macaroni tried to climb back into the ring, but Aro Usal held out his long, skinny leg with his foot against Macaroni’s face.
“Congratulations, Queen Rhino! It looks like you’re one step closer to thirty bucks!” Wooo! The rhino couldn’t be prouder of her rump. As she walked off stage, fans cheered, everyone asking for her to autograph their tuckus.
“Please let me back in the competition, Oxnard!” Macaroni cried from outside the boxing ring. The referee kindly shooed her away from the stage.
Oxnard watched from above with a sinister smile.
“Golly Oxshnard, are ya gonna let Lil’ Mac back in the game?” Bushy pondered.
“I dunnoooooo... if she wants another chance, she might have to earn it, huhuhuhuh.” It looked like Macaroni’s return would come at a price... “But for now, something completely different! And much more gay.”

Oops I accidentally deleted the audience commenting area after the first post and didn't fix it for like... the next 10 posts. Oops.