#20 - Kill The Cheaters - in Anger Mouse: The Pregnant Male 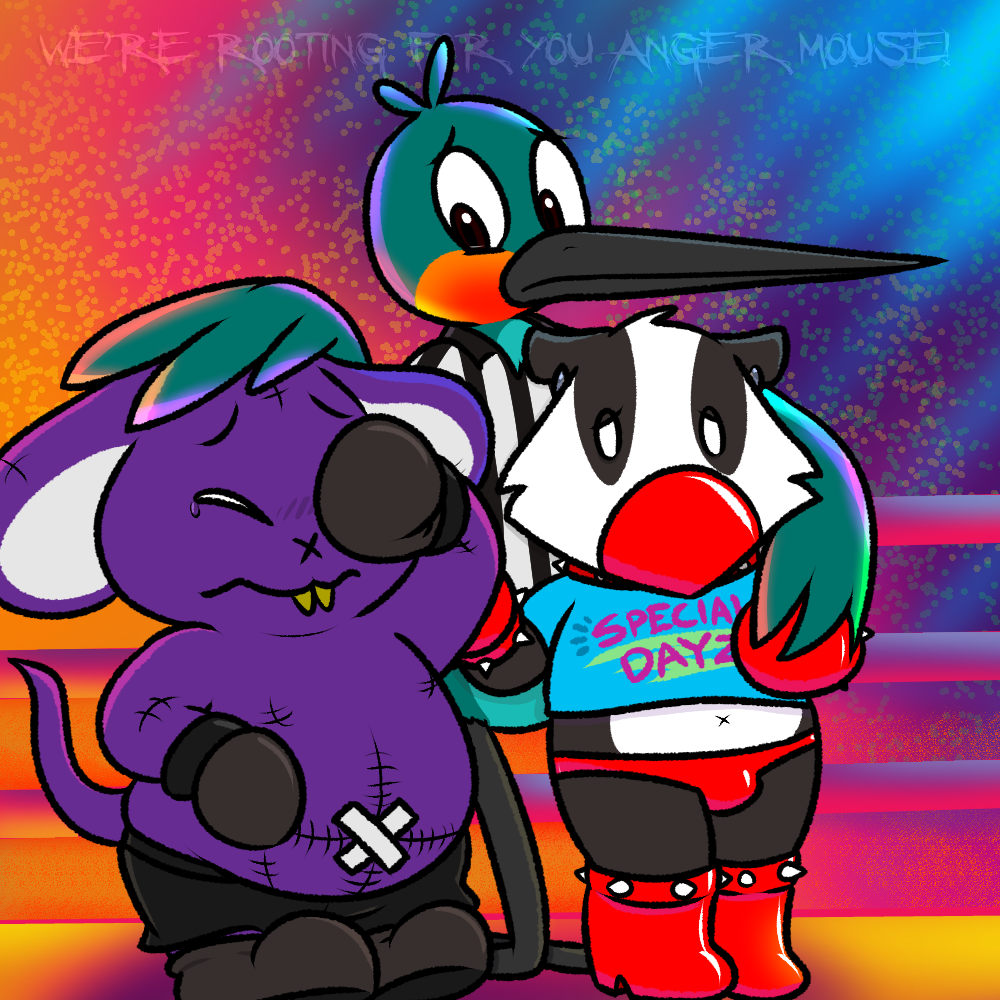 “I’M NOT PREGNANT ANYMORE!” yelled Anger Mouse, as two mysterious figures questioned him.
“Prove it. Where is the baby?” the mysterious pair asked.
“I DON’T KNOW,” the mouse raged.
“How come you’re so bad at being a parent but so good at giving birth?”
“I’M NOT A PARENT. I’M EIGHT YEARS OLD. I’M STILL A KID.”
“It looks more like you ate-a-year-old.” One of the figures laughed, “You can still be a parent even if you’re a kid. If a kid gives birth, then they’re a young parent.”
“THAT’S IMPOSSIBLE!” Anger cried, though the truth could not be denied.
“We have had it up to HERE with your behavior, Anger Spouse,” an annoyed fist slammed on the table, “tell us who the father is.”
“THERE IS NO FATHER. IT WAS ALL ON MY OWN.” The mouse screeched.
“That’s not how babies work,” sighed the less mysterious tanuki. “Assistant Birdbutt, show him the book.”
“Here ya go, boss,” the helpful bird babe fella handed the book over.
“Ever read one of these?” the tanuki dangled the book in front of Anger Mouse. The rodent squinted his eyes and gasped at the title, The Miracle of Birthing. The cover of the book looked cheerful and pleasant, in calm, pastel colors. A most obvious disguise to the horrors lodged between the pages.
“I HATE NICE BOOKS. I DON’T WANT TO HEAR ABOUT SISSY HAPPY FAMILY STORIES.” The wretched mouse kicked his chubby legs about.
“Oh, don’t worry...” Nik-or uh, the... mysterrrrious tanuki slowly opened up the pages. “This book makes kids scream, it makes grown ups look away. Nine out of ten people can’t complete the book. Even people that actually enjoy reading!”
“DO PEOPLE REALLY LIKE READING!?” Anger’s eyes widened in horror.
“No.” Nobody enjoyed reading. The tanuki knew the truth.
“Look, Anger Mouse...” Assistant Birdbutt calmly spoke, “we want to help you feel happy. If we find your hopefully underage husband and disgusting child, we can make your life happy again.”
“Let us force you to be happy,” the mysterious orange animal named Nikki nodded. “It’s our current mission.”
“LET ME AND MY GUARD OUT OF HERE AND I’LL TELL YOU WHAT WILL MAKE ME HAPPY.” Anger glared at the pair that was barely mysterious anymore. The two complied, freeing Anger Mouse first.
“So, what can we do to make you happy?” Assistant Birdbutt calmly asked.
“NOTHING.” He then dragged his blind-folded guard out of the booth with him, “NOW LEAVE ME AND MY GUARD ALONE OR WE’LL GET IN TROUBLE.”
Maybe Nikki and Thanks’s plan to help Anger Mouse win would get him kicked out of the competition. The two decided they would have to be more careful about their approach.

Everyone was heading out of the building for the night, and as Nikki stepped out, she looked up towards the night sky. Everything felt temporary when she knew she could be reset at any moment.
The tanuki noticed a bright yellow flash across the sky. She looked behind her back, and saw a yellow figure on top of the roof of the Boxer Beats building. It was the same dog that kept resetting her. Nikki worried that any interaction could send her back to the past, but the dog just stayed up there, staring at her.
“Alright...” Nikki sighed, feeling compelled to go up while she had the chance. Dawn the dog was waiting at the top, her stubby black tail wagging.
“So uh... hey,” Nikki awkwardly started. “I’ve been working on the list like you said... I’m starting with Anger Mouse...” Dawn looked around silently. “I uh, hope that’s okay.”
Dawn slowly nodded.
“Cool...” Nikki replied to the silent pup.
The two stood there, both feeling strange with how their relationship was now a forced assignment that neither completely understood.
“Oh, hey, something weird happened.” Nikki thought, “I was asking everyone what would make them happy, and someone said that making everyone win the competition would make them happy. Kind of like what we’re doing... right?” Nikki sighed, “I’m not even sure what I’m doing. You said to make everyone on this list happy, and that means I have to help the right person win the competition, right?”
Dawn didn’t want to answer. But she looked away from Nikki and responded, “All of them. You have to. Help them all. Win the thing.”
Nikki gripped the paper, “But only one boxer can win the tournament...”
“One boxer. At a time.” Dawn sadly stated.
“One at a time? So... is this going to take years to complete?” She started to sound angry. “Or are you going to reset me once for every name on this list!?”
“...I have to.” Dawn closed her eyes. “You and I. Are both stuck. Until the list. Is completed.”
Nikki hated the idea of being reset again and again. “And you can’t do it on your own and leave me out of it?”
“You will still. Wake up. From each reset. And fight me,” Dawn moaned. “If you remember. The list. We won’t fight. As much.” Nikki never remembered everything whenever she was reset, and it sounded like that caused a lot of problems for Dawn.
“So, I don’t remember everything that happens... but do you?” the tanuki asked.
“Yes. I remember everything.” Dawn looked hopeless. She was forced to watch their disaster play again and again. “You. Were supposed to. Remember too. But you don’t...”
Nikki wished she could. At least she knew why these two had so many problems now. “So, uh. Nishi was the one that said he wanted everyone to win... are we following his plan?” Nikki really wanted to solve what was wrong, but she didn’t feel like she had all the information. “I see he’s on the list too...”
Dawn started to growl.
“Uh, was that bad? Should I not mention him?” Nikki chuckled cautiously. “He’s on your list. You wanna make someone happy even if you don’t like them?”
Dawn started barking at Nikki, showing her teeth.
“Allllright well I’m gonna go now, sorry, see ya!” The tanuki lady ran for the door, and left the building. “What a rude noodle.”