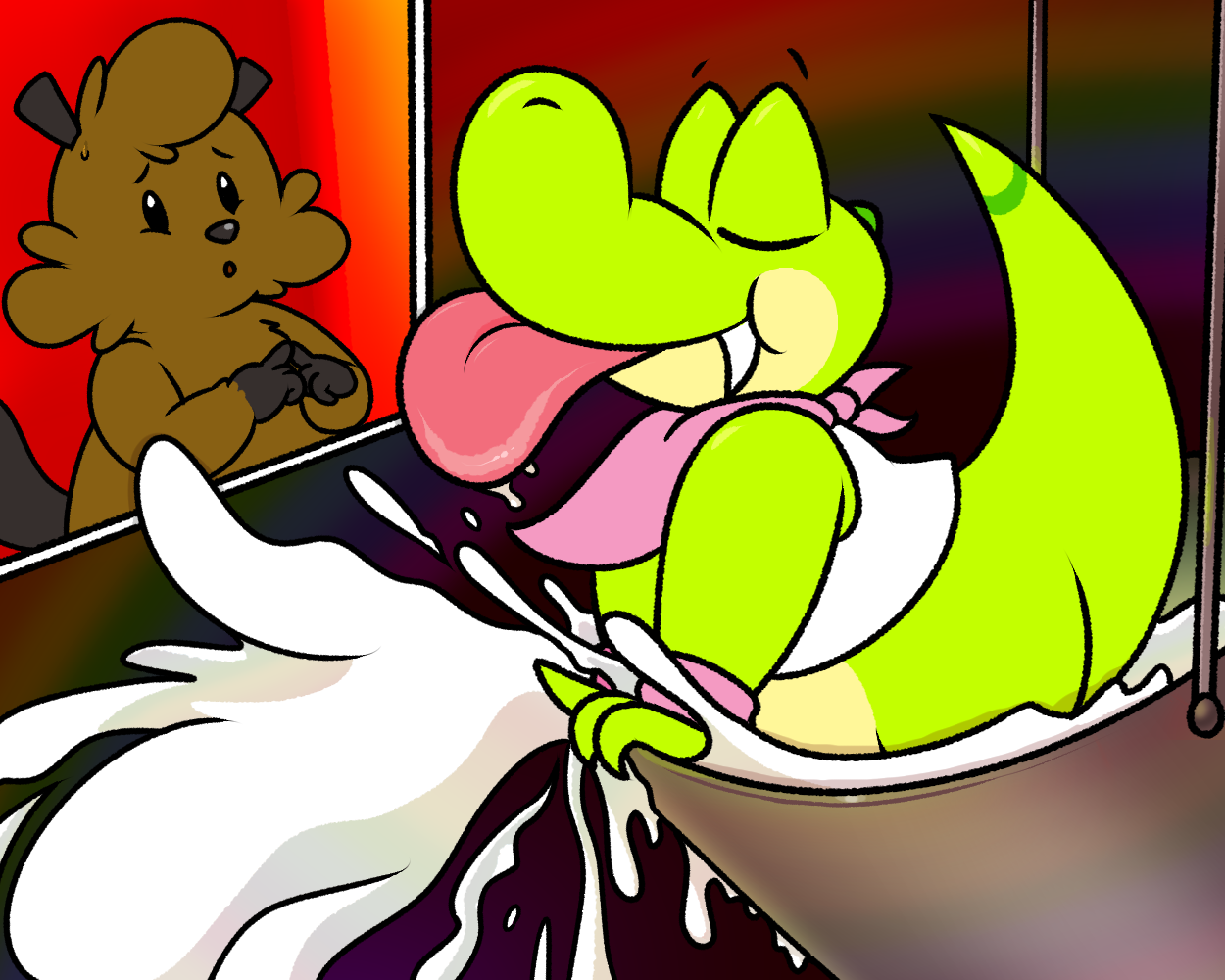 The Boxer Beats competition was off to a great start! The fights were weird, the boxers were skimpy, and everyone was having fun not taking it seriously.
“See? This is what I wanted. Something fun, creative, and a little naughty. Somewhere you and I can relax, watch hot animals fight, and not feel bad about anyone getting hurt.” Oxnard sat back in his chair, satisfied. The competition went exactly as he’d hoped!
“Do ya think they shushpect anything, Oxshy?” Bushy poked her fingers together. “That we only really did thish thing sho we could shee hot animalsh in tight shortsh boxsh around?”
“I dunno. I’m pretty open about it, and I bet some of them are here for that reason too.”
Bushy Beaver pouted, “I dunno, I might shtart feelin’ guilty...”
“Okay then,” Oxnard laughed, and grabbed the microphone. “HEY. Everyone stop your faces.” The audience went silent, and the overhead video screens switched to Oxnard and Bushy in their announcer booth.
“We don’t care about actual boxing. Bushy and I just like seeing hot animals. WHO’S HERE TO LOOK AT HOT BOXING STUDS AND STUDETTES?” The crowd belted out loud, relieved cheers! A lot of them were actually very happy to hear something honest. I mean, if they weren’t here to see real boxing and fighting, they just wanted a show - and nothing wrong with wanting to see cuties.
“Haha, see, Bushy? We’re all the same. Aren’t we, folks?” The fat hamster grinned at the audience, who happily clapped about.
“Wow, sho... if that’sh the cashe...” Bushy nervously said out loud, “let’sh get back to the actshion!” The crowd cheered again as the cameras panned down to a boxing bunny and fox.
“Gee, thanksh Oxnshnard. I guessh... I don’t feel bad about liking thish shtuff anymore.” The beaver gave a proud little smile on her chubby face as Oxnard nodded.
“There ya go, buddy. Ready to enjoy the competition without feeling guilty for bein’ a randy rodent?”
“Beaversh are rodentsh?”
“I know, that’s crazy, right? You think of rodents as small critters, but I guess it’s about the big buck teeth we have. Whatever. We learned something today.” Oxnard winked towards the camera, “See? It’s not just a show for ooglers - it’s officially educational!”
“I learned that everyone out there ish an oogler.”
Oxnard pushed down Bushy’s microphone. “That’s enough learning for today.”

“Ring-a-ding-ding, let’th thtart thith thing~!”
No, that wasn’t Bushy’s weird accent. That weird accent belonged to Gaydar - the professional boxing gator!
The bunny and fox looked up to the ceiling, and saw an alligator swinging around on a rope - at the bottom of the rope was a bucket - and at the bottom of the bucket was glue - and...!
All that glue from the bucket attached to the rope under the gator splashed down all over the boxing ring.
“Hey, you’re messing up the ring!” cried a short angry bunny from below.
“Acthually, I’m thticky-fying it,” the lisping alligator calmly replied from behind his large pink tongue. “For thith event, you two gotta fight while the floor ith covered in my gator glue!”
“That’s gross. I’m not fighting in that.” The teal bunny looked up at him, “And frankly, I’m not convinced this is glue. For all we know this could be-”
Faceplant.
A brave orange fox stood on top of the rabbit, who was now laying in the pile of glue. “It’s okay, Lesbuni. You don’t have to fight in the glue. Just let me fight while standing on top of you! You like being on the bottom, right?”
Lesbuni’s face was stuck in the glue, but she probably wasn’t happy, and a little embarrassed by the foxy fox’s statement.
The proud lispy gator waved from above as he was raised up and away from the ring. “Good luck, galth!”