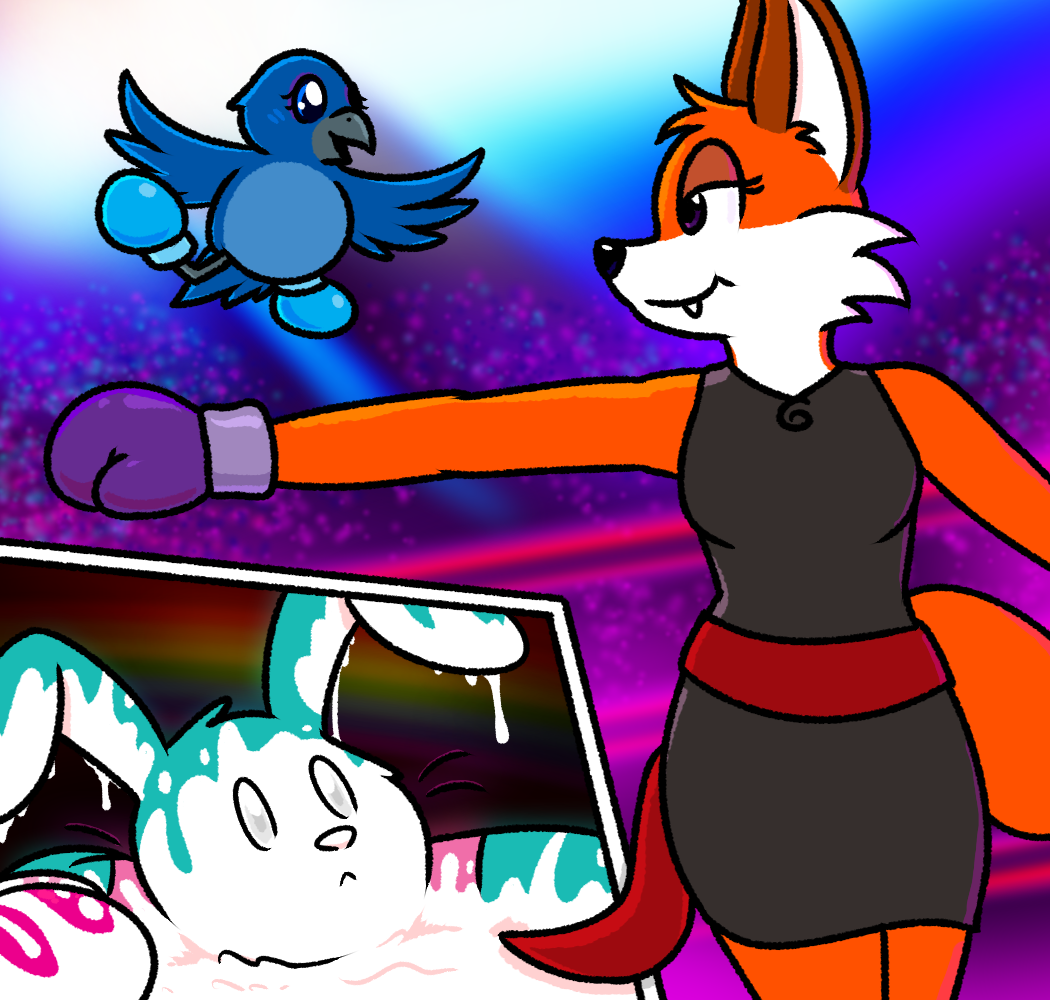 The fight was finally almost really ready.
Oxnard announced, “Let’s find out who Foxie and Lesbuni are going to be fighting for the first tag-team match.”
“There uh, ishn’t anything written down for thish pershon’sh name, Oxshnard.” Bushy grimaced, pointing to some papers.
“Alright! It looks like they’ll be fighting a Nameless Bird.”
A team of two birds flew in and perched on ropes of the ring. They gave a peaceful little tweet.
Foxie looked up at them. “So uh, those two are fighting birds? Or did they accidentally fly in here?”
The crowd began a confusing discussion about the difference between feral animals that didn’t talk, and larger anthropomorphic animals that could speak. During the confusion, one of the birds swooped right in and punched Foxie in the gut! The crowd went crazy over it.
“Did you see that!?”
“No.”
“Oh, okay...”
But, for the audience members that saw, they were shocked the blue birdy got in a surprise attack. The nameless avian wore boxing gloves over its talons - it totally meant to hit her.
“Hey, what the heck, bird.” Foxie was upset!
“Haha, oh, Gaydar’s gator glue is a little pointless here.” Oxnard realized, “It won’t effect the birds, only Foxie and Lesbuni.”
“Yeah, Oxshnard,” Bushy chimed in, “the birdsh wanted the floor covered in glue. They thought of thish event.”
Oxnard gasped, he really didn’t pay attention to his job! But it made for fun surprises.
Meanwhile, Foxie already had a plan in mind, “I have a plan in mind.”
Great.
Foxie punched the glue-covered floor, and the bird gave a confused tweet.
The bird went ahead and tried to attack Foxie, but she blocked! And the bird flew right into Foxie’s glue-covered glove.
“Woah, what is this!?” Oxnard gasped - the nameless bird was stuck, glued to her glove! The crowd was in awe. The bird fluttered helplessly. They couldn’t escape!
Foxie landed countless hits (fourteen of them) on the bird, before one swift swing sent them flying off into the distance. The referee counted to three, and without any sign of the bird, Foxie and Lesbuni were crowned the winners.
“We did it!” cheered Foxie, hopping up and down on top of Lesbuni. “As a team, equally!” The fox then lifted up the cute teal bunny’s head to make sure she was still alive. “Why don’t we go get you showered off...” Lesbuni nodded at that, and gave a weary smile before the two gals headed off to the shower together.
“Lesbuni and Foxie sure make a great team!” Oxnard announced as everyone settled down from the fight. “Now let’s see how well they do in the showers...”

The shower scene was great. But nobody was interested so we’re skipping over it.