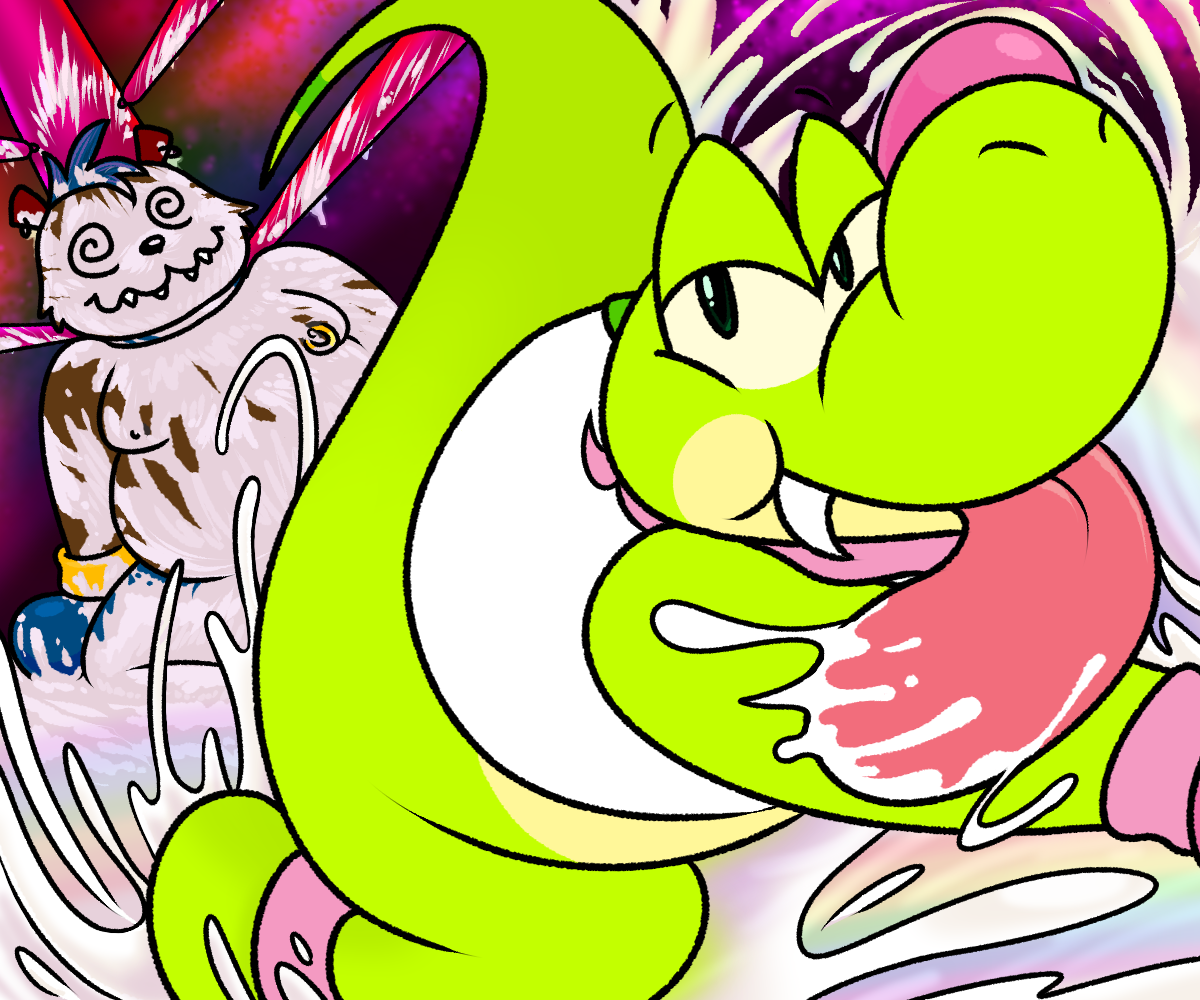 “Whew! That sure was interesting learning how to wash a bunny, wasn’t it, Bushy?” Oxnard smiled, leaning into his co-host.
“Shure wash! I feel bad for anyone that misshed it.”
Oxnard nodded, “I’ll say. That would be a shame.”
“Anyway! It’sh time for our nexsht boxsher, Gaydar!” Bushy flailed about excitedly as the big green gator from earlier stepped on stage.
“Hey now!” yelped a chubby beaver with a blue mohawk, “The stage’s all covered in glue, aren’t we cleanin’ it?”
Oxnard coughed into the microphone. “Oh, uh, I think we were going to, but then we spent a lot of budget on that shower. We can’t clean up too much else right now. Sorry, deal with it I guess.”
The beaver huffed and hopped into the ring with Gaydar.
“So we can still walk around in the glue?” The beaver smiled, looking down, “Guess we can still fight!”
“Acthually~” Gaydar grinned, showing his long, sharp teeth. “It’th gonna thtick to your fur... but the glue thlideth right off my thcaleth, tho I’m okay!” The beaver looked down and tried to walk, but his legs were stuck. He easily lost his balance and fell on his butt. He looked up at Gaydar as he swaggered on over to him, but uh, backwards.
“Git yer caboose away from me, fella!” The punky beaver leaned away, the rings pierced to his nipples gave a helpless jiggle.
“Three-five-four-two-one, fight!” announced the ref!
Gaydar reeeeeeeled back his tail before slapping that beaver with it. Back and forth, “Thlippity thlap~” For a gay reptile, he sure was pounding that beaver. Enough slaps to the cranium and the beaver was out.
“Victory to the gorgeous gator!” cheered Foxie, walking back to the sidelines. “Great job!”
“Aww thuckth, thankth little lady,” Gaydar grinned, leaning down to shake her hand. The crowd cheered for him, and demanded countless replays, watching him back up his rump in slow motion and shaking it about with each slap. Gaydar loved knowing people enjoyed the show.
“Ooh, thpeaking of gorgeouth...” Gaydar curiously pointed out towards the entrance, where two shadowy figures made their way out. Uh, how did he know they were gorgeous if they were shadowy? Okay nevermind, they weren’t shadowy.
In front of Gaydar and Foxie was another reptile and fox! One was an orange dinosaur, wearing green shorts with matching boxing gloves. The fox was an older scraggly lady - with presumably bad breath. She was totally naked, aside from the boxing gloves.
Foxie looked back and forth between the oogling Gaydar, and the scraggly fox woman. “Oh, gross. You think she’s attractive!?” Foxie was almost insulted, but she figured Gaydar may just have weird taste in fox women.
“I wonder what their name ith...” Gaydar sighed, before yelling up at the video screen. “Announthe ‘em already!”