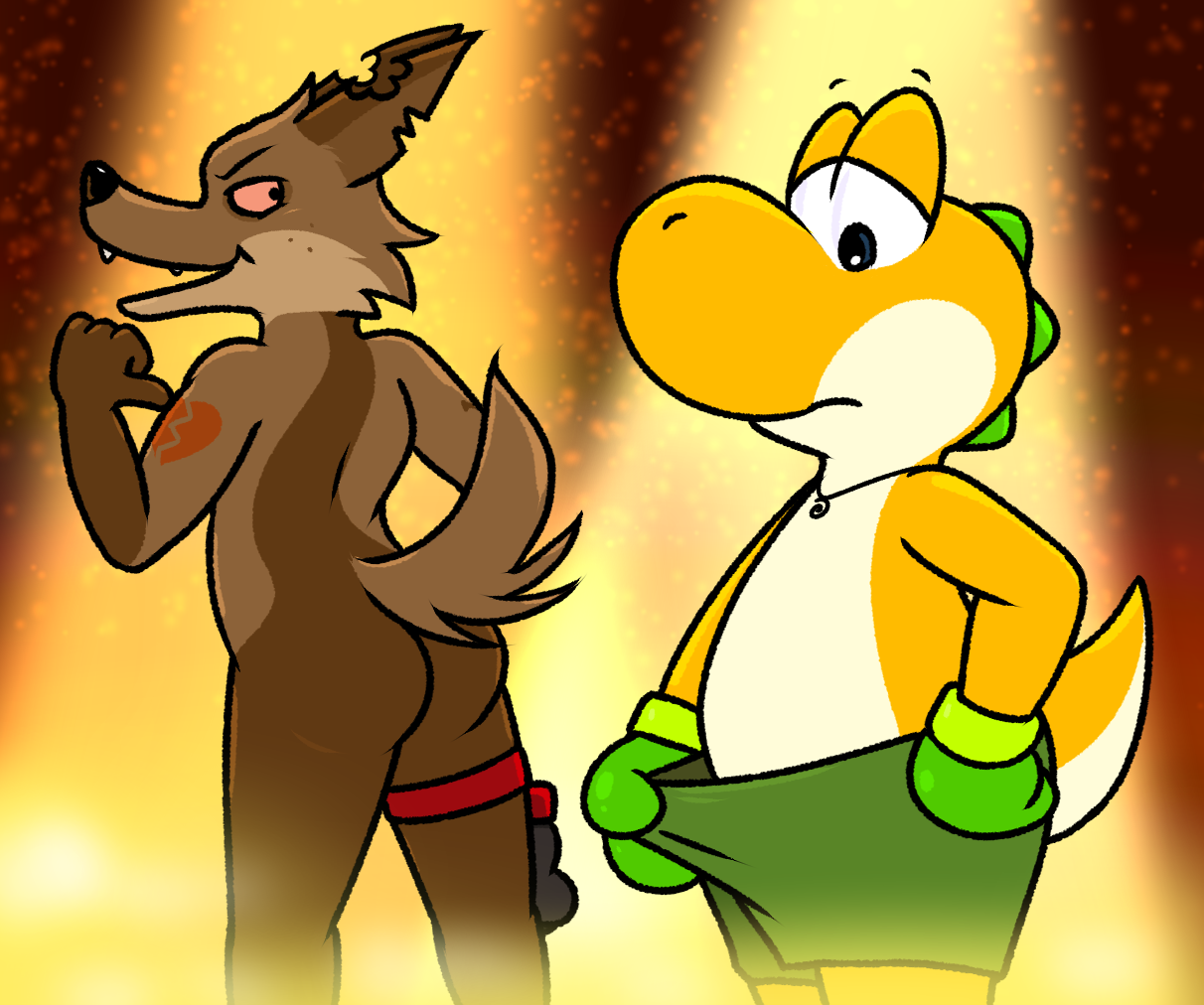 “Alright, alright. Let’s announce this next tag-team! They’re a couple of friends of mine, but I can’t give them special treatment because it would be really obvious. So give it up for your favorite team in the ring - Team Dino Pubes!”
The crowd cheered until more confusion set in, mostly over the name.
The fox lady playfully opened up the front of the reptile’s shorts and looked inside, “I don’t see any in there.” The lights all focused on her dino-pal, Nishi - outed for being completely bald downstairs.
“Dinosaurs don’t grow hair down there! It’s normal. I’m an adult, so stop making fun of me!” the orange embarrassment whined. He scowled at his prankster partner, “Thanks a lot, Fuxie. You’re just showing off because you’re covered in fur.” He then looked to the cameras and pointed to her, “How about that!? Just look at her! She’s totally bushy! So bushy, it takes up her whole body! That’s so much weirder than me not being hairy.”
The audience went silent at his attempt to embarrass Fuxie. Bushy beaver picked up her microphone to let Nishi know, “That’sh rude.”
Biting his lip in nervousness, Nishi flipped his brown fox friend around, and pointed at her butt. “Haha! Well look at this, her butt’s covered in fur! She’s got a hairy butt, isn’t that weird!?” But after a long silence, the crowd started to react.
“Hey, I have fur on my butt too, it’s not weird!”
“Would you say that if a guy had a hairy butt? Hmmmm?”
Nishi was in trouble - apparently it’s okay to make fun of people for not having fur, but making fun of them for having fur? Nope. Luckily, Fuxie grinned towards the camera, “Hey, that dinosaur was looking at my ass. Can you believe it?”
The crowd cracked up as Nishi was now, not only hairless, but a butt-looker too.
“I wish we could restart the competition right now.” Nishi sighed, and took Fuxie’s hand as they walked up to the boxing ring. There wasn’t any winning this crowd, but at least Fuxie was funny enough for their team to not be disliked.

The glue covering the boxing ring finally dried up, so it wouldn’t affect this next fight. Nishi and Fuxie were soon joined by their tag-team opponents. One was a fudge-colored seal, and the other was vanilla-colored - they both looked delicious! Nishi licked his lips and bounced right up ahead to fight first.
“Sho, for thish match, everyone hash to fight only ushing their foreheadsh,” Bushy Beaver announced. Nishi patted on top of his large eyes - he didn’t have much of a forehead.
“Oh, oh no... I can’t do foreplay with anyone, Fuxie! I don’t have foreskin on my head!” He pat on his cheeks, “That’s not very fair. My eyeballs are strangely soft, and sensitive.”
As Nishi pouted, Fuxie crawled in through the ropes. “What’s that? Your balls are sensitive? Maybe when you grow fur on ‘em they’ll toughen up.”
“FUXIE!!” Nishi cried - she couldn’t hear his despair over the audience, loving all her teasing. Or well, the furry ones loved it. Some reptiles and feathered birds couldn’t quite get in on the humor. Fuxie was about to get a big dose of karma her way - she looked at who she’d be bumping foreheads with during this fight and... both seals had large spikes on their noggins, like unicorns!
“What the heck!? That ain’t fair,” Fuxie grumbled. The vanilla-colored seal waggled his eye brows, and gave a silent wink. He then nudged his fudgy partner. He was doing a bad job of telling Fuxie the fight gimmick was his idea.
“Three... one... fight!” the referee cawed - still unable to do one darn thing right.
Fuxie charged the fudgy seal head on. Her normal round forehead smashed right against his pointy horned forehead, and... ouch! Fuxie yelled some very obscene words in pain, and had a big hole in the middle of her forehead, right where the spike left its mark.
Her concerned teammate called out to her, “Uh, Fuxie, you don’t look okay...” She needed a moment to rest, and laid back against the ropes while Fudgy and Vanilla switched places.
“You ready for me to bang my horn against that hole in your head?” the vanilla seal smirked, “We can do it repeatedly.” Fuxie gave him a deadly glare. She wasn’t happy - and charged right at him. “Oh baby, here it comes!”
“Fuxie, don’t! You already tried that, remember!?” Nishi cried, watching Fuxie dash right towards the horny seal again. But this time, she dodged to the side, and banged the side of his forehead! He was so caught off guard, the seal went flying right out of the ring! The only thing left of him was his boxing glove, which flopped about in the air and fell right inside the hole in Fuxie’s forehead.
“That’s better,” she gave it a gentle pat. She didn’t look like a weirdo anymore, she looked like a woman with a boxing glove stuck in her head. That’s normal here!
“Give it up for Team Dino Pubes!” The crowd cheered, Fuxie already a fan favorite amongst the audience. The tag-team referee held up Fuxie and Nishi as they celebrated their victory.
“We did it, Fuxie! We survived our very first match.” Nishi smiled proudly at mostly-Fuxie’s accomplishment. He looked over and watched her fall flat on her face, kind of like she was dead. But she wasn’t! Probably. Either way, Nishi kept their team morale going with a half-hearted, “Yaaaay...” before using a broom to sweep Fuxie off stage.