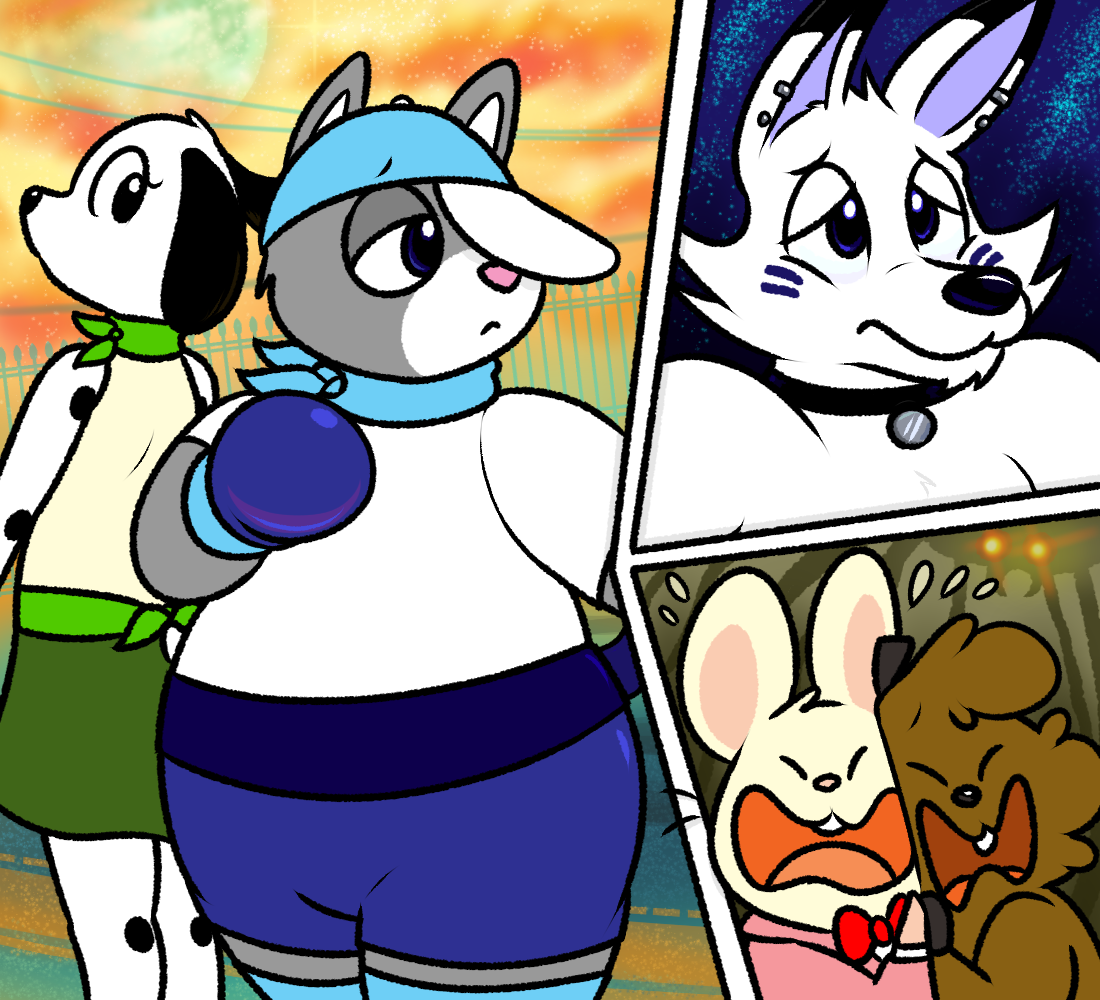 It was the morning of a new day at the tournament.
On the sidewalks walked a side of the story that’ll be the next focal point - two animals. One half of the focal point is Chris - a pudgy gray kitty dressed in tight blue shorts, and a cyan-colored hat with a bill that covered their left eye. The other half of your undivided attention falls on Kiwi - a dainty dalmatian dressed in a green skirt, walking beside Chris.
One year ago, there was a thing that happened to Chris - but who cares about that. There was some exciting walking going on. And what did that walking lead to? A protest - where comedy creates itself. And like any protest, Chris and Kiwi did their best to stay the heck out of it. They held hands for safety, but Chris noticed someone familiar. He was a strong (super strong, giant arms and tiny tummy strong) arctic fox-wolf, thing... named Stan!
On that note - most species here don’t just marry their own kind - a lot of them blend together, mate around. You’ll often find mixed-species critters on Our Planet because everyone wants to get it on with everyone else. Despite looking hot enough to bang, this wolf was much too shy and virginal to mate any time soon.
Stan had a group of other strong boxers gathered around him - and strangely, their protest was surrounding a brown cardboard box.
“I-I know Oxnard is in there. He’s a small hamster, so this is w-where we have to wait for him...” Stan nervously planned, “and then w-we can tell him... why we don’t like the Boxer Briefs tournament... and hopefully he’ll listen to us.”
A lion in the group roared, “Or we’ll MAKE him listen!”
“We’ll grab him and beat him up!”
“Yeah, Oxnard’s not a very good artist either!”
Wow, these pea-brain protesters were rude. Ruder than Stan wanted! “Y-you guys, no, not like that...” the big-hearted muscle-head whimpered. “We can’t just beat them up... you’ll get in trouble.” However, Stan knew the real reason why he didn’t want to - because it wasn’t nice.
The boxer friends that Stan had weren’t very nice, but they weren’t good friends either. However, that’s kinda... how these boxers were. They liked to fight, get paid, and have things their way. They weren’t used to being told what to do, but... Stan was the strongest of them all, and won the Boxer Briefs championship last year. Since he beat all the other boxers, he was basically the most important, and they listened to him. But Stan knew that if his plan didn’t work, they wouldn’t listen anymore, and others would get hurt. Stan would feel responsible for it all, carrying the safety of the world on his boulder shoulders. He only wanted people to be happy!
In that little moment, Stan was being watched, by Chris! Chris was a professional boxer, very aware of who Stan was. But... Chris wasn’t very popular, so nobody noticed the kitty boxer walking by the boxing protest.
“Hey, he looks familiar,” Kiwi whispered as the two passed by. Kiwi wasn’t a boxer, but she attended Chris’s fights now and then.
Chris didn’t say anything - which was common for the cat, so they kept moving. Strangely, when they got to the building Boxer Beats was actually held at, everyone was stuck waiting outside.
“Oh no no! Should they not be open right now?” Kiwi fussed behind the crowd.

“NOBODY GO INSIDE,” a panicked voice yelled from the front doors, “IT’S NOT SAFE, THIS IS AN EMERGENCY.”
“Oxshnard, shtop it! It’sh not that big’a deal.”
“OH. I’m sorry, do YOU want to go in there!?”
“What are you, nutsh!? I’ll die if I do!”
“Somebody call the police!!”
“Oxshnard, you ARE the policshe!”
“Oh my god.”
Whatever was going on seemed like a big deal, but it was getting boring. Also, Chris? Never stopped walking. They dully kept moving, through the crowd, as everyone tried to figure out what to do.
“I’m a police officer, Oxnard,” came a heavenly voice from a devilishly good-looking goat MILF. “I could shoot it!”
“Shooting isn’t the answer to everything, you goat pig!”
The crowd fussed more as Chris finally made their way to the front door, and walked straight in. The crowd gasped. “That cat’s crazy!”
“What’s the big deal?” Chris slowly turned around, facing the crowd. Everyone SCREAMED at the top of their lungs - there was a spider right on top of Chris’s face. Chris wasn’t even aware. Everyone looked away in horror as the doors suddenly closed. Oxnard and Bushy clawed against them, as if they’d escaped a monster.
“They’re done for. I can’t believe it. Someone already died.”
“Oxshnard, I think you might get shued.”
“Oh, then maybe they’re still alive, let’s see.” The tiny hamster opened up the door, and Chris was still standing right there - but no spider on their face. “OH MY GOSH, IT’S GONE.” A hummingbird in the crowd fainted. “WHERE IS IT? CAT. Where. Is. The. Spider?”
Chris gently leaned down, and opened the palm of their hand, dropping the spider on the ground to crawl away freely. Half the boxing fans freaked out, while the other half cheered to see the spider survived.
“I didn’t think either of them would make it out alive, but miracles happen, you know?” Oxnard smiled with relief. He held up his speakerphone to the cat. “Brave feline, tell us your name!”
“Uh... Chris.”
The crowd lit up, and chanted Chris’s name, “Kiss! Kiss! Kiss!” Okay, they almost chanted it correctly. But hey, they tried. Collective groups aren’t that smart anyway.
“A kiss? With Chris?” Oxnard grinned, “If the crowd insists...”
“Ahem,” coughed Bushy.
“Alright alright. Well, I think we found the hero of Boxer Beats - a true winner! Someone brave, someone kind... someone I’d like to take out to dinner~” Oxnard nudged Chris and winked. “Are you... interested?”
Chris blankly stared at Oxnard - not giving an answer.
“I... guess we’ll see! Thanks to you, kissy-cat, we can all safely enter the Boxer Beats building. That thing literally scared the spots off of me. Don’t ask for any favors, but we owe you one.” The crowd rushed inside, many folks congratulating Chris on a job well done along the way.
As the crowd faded, Kiwi met with Chris again. “So... they could not go in because of a spider? That is... interesting.” She was about as speechless as Chris was, until she realized, “Hey! You were really nervous about your first day here, but you already started off on a good note with everyone. You are a good kitty, Chris.”
The fat cat gave a little blush and purr. They weren’t used to so many compliments. The two headed in to start their first big day inside!